July 12, 1955: Stan The Man Leads The National League To Victory With a 12th Inning Blast 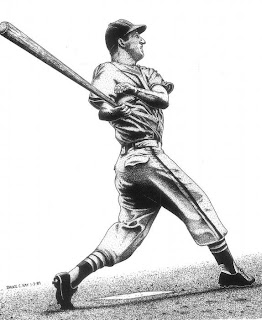 On July 12, 1955, Stan The Man Musial led the National League to a 6-5 victory with a walk off home run in the 12th inning at Milwaukee County Stadium. Musial's shot was a record breaker, he came into the game tied with Ted Williams and Ralph Kiner with three long balls in the Mid Summer Classic, his fourth homer was an instant classic as it won the game for the National League. The game was a true battle, the American League scored 4 in the first then another in the sixth to give them a 5-0 advantage, the National League fought back with runs of their own in the seventh and eighth to tie the ball game up at 5. When Musial stepped into the box to lead off the twelfth inning the American league backstop Yogi Berra said to him "My feet are killing me" Musial shot back "Relax, I'll have you home in a minute" and he wasn't kidding. Stan jumped on the next pitch and sent the American Leaguers packing. Musial holds several All Star records, he made 24 appearances in the game which has only been matched by the great Willie Mays, he has the most total bases in the history of the game with 40 which is another record he shares with Mays, he is the only player to hit 6 home runs in the contest with his fifth coming in 1956, before his final all star long ball in 1960.

The 1955 game winner was voted the top moment in All Star game history in 2011: http://www.youtube.com/watch?v=GHsGaodBt0c

The artwork was done by Bruce Kay, it can be found at Fine Art America: http://fineartamerica.com/featured/stan-the-man-bruce-kay.html