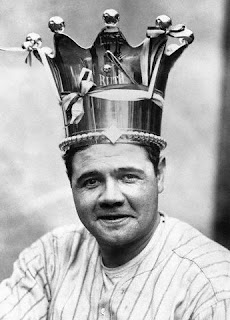 On July 13, 1934, Babe Ruth reached 700 home runs with a 2 run shot off of Tommy Bridges in the third inning at Navin Field in Detroit. The big blast helped lead the Yankees to a 4-2 victory over the Tigers. The Bambino's homer gave the Yankees an early 2-0 lead that they would not relinquish. After Detroit cut the lead in half in the bottom of the third both starting pitchers would not let a run cross the plate until the eighth when Bridges got into a bit of  mess that Bill Dickey helped clean up for the Yankees. Dickey knocked in two runs with a double to give the New Yorkers a little breathing room. The Tigers came back with a run in the bottom of the eighth then their bats went silent as Ruth and the Yankees celebrated a milestone and a win. It was the 14th home run of the year for Ruth, he hit 8 more to finish with 22 bombs on the season. He hit his last 6 dingers as a member of the Boston Braves in 1935. Ruth hit 714 home runs in his storied career, his first came on May 6, 1915, his last three came on May 25, 1935. The 714 home runs stood as the all time record until Hammerin Hank Aaron hit his 715th in 1974.