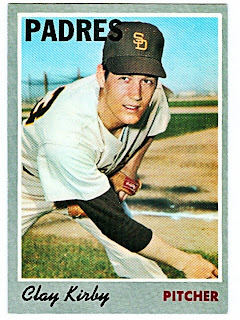 On July 21, 1970, San Diego Padres hurler Clay Kirby was lifted for a pinch hitter in the bottom of the eighth inning despite the fact he had a no hitter going against the New York Mets. The pinch hitter struck out then Jack Baldschun came into pitch for the Friars and gave up 3 hits and 2 runs in the 3-0 Mets win. The game started a bit rough for Kirby, he walked Tommy Agee to lead off the game then Agee stole second, after a quick out Ken Singleton reached with a walk, then both Agee and Singleton  moved up on a double steal  before Art Shamsky hit a ground ball to second baseman Ron Slocum, who threw him out as Agee scored. The Mets had scored the run without a hit being recorded, from there Kirby found the zone, he walked 3 more men but not one New York hitter was able to pick up a hit against him. Despite the fact that Kirby hadn't allowed a hit, his manager Preston Gomez sent Cito Gaston to hit for him in the bottom of the eighth, Gaston had been nursing an injury but he had some pop in his bat and the skipper thought it gave them an opportunity to win, he was wrong. After the crowd let the skipper know their displeasure Gaston struck out, Baldschun just made matters worse by giving by giving up a hit to the first batter he faced on his way to giving up two runs. The Padres were in just their second year of existence, they were not a very good team as they only won 63 games all season, to this day they are the only team that does not have a no hitter pitched in franchise history. I bet if the ole skipper would have known the history that followed he would have kept Kirby in the game

Posted by Wade Forrester at 1:26 AM