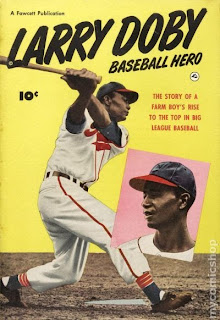 On July 5, 1947, Larry Doby became the first African American to play in the American League when he came into pinch hit for the Cleveland Indians in the seventh inning of a game against the White Sox at Comiskey Park in Chicago. The 23 year old was just the second African American to break Major League Baseball's color barrier as he followed Jackie Robinson into the sport that was in a time of change. That July 5th was a whirlwind day for Doby, after inking his deal with the Indians, the owner of the club Bill Veeck personally drove him to Comiskey Park. His debut at the dish wasn't what he had hoped for as he was called into pinch hit for pitcher Bryan Stephens in the seventh inning with one out and runners on first and third, Doby worked the count to 2-2 before striking out. While it might not have been the perfect way to start a career in the big leagues, it was another step forward for Major League Baseball and good times were on the way. The young centerfielder only made 29 appearances in '47 and hit just .156 before the campaign came to an end. His first full season in the league came in '48 and he showed the people of Cleveland why he was there by batting .301 with 14 homers as he helped lead the club to a World Series Championship. Doby only got better, he made the first of 7 consecutive all star appearances in '49 and would lead the league twice in home runs in '52 and '54. While Doby's debut in Major League Baseball was not as widely publicized as Jackie Robinson's, it was just as important as he helped baseball take another step forward. In 1978, Doby became just the second African American to manage a big league club after Bill Veeck hired him to manage the White Sox, his career as a manager was short lived but it was another example of times that were changing and he was a part of that change. In 1998, a special veterans committee elected Doby to the Baseball Hall of Fame where he will forever be immortalized as not only one of the greatest players to step on the field but as a pioneer who helped the sport move forward.

Check out Doby's career numbers and his accomplishments  here: http://www.baseball-reference.com/players/d/dobyla01.shtml
Posted by Wade Forrester at 12:39 AM