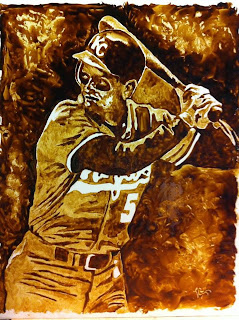 On July 24, 1983, at Yankee Stadium in New York, George Brett lost his mind after being tossed from the game becasue he had too much pine tar on his bat. The ejection came after he hit what appeared to be a two run shot ff of Goose Gossage that would have put his Royals up 5-4. Instead, Yankees skipper Billy Martin came running out to the umpire, Tim McCelland, to point out the pine tar that was clearly passed the allowed 18 inches above the handle. McCelland voided the homer and called Brett out, ending the game and giving the Yankees a 4-3 win. What followed was one of the most memorable meltdowns in the history of Major League Baseball as Brett came charging out of the dugout like a man possessed. He nearly ran the ump over while steam was coming from his ears, then his head exploded shocking everyone in attendance. I might of stretched that one just a bit but it was the epic meltdown of epic meltdowns. Billy Martin had been waiting for the moment he needed to use Brett's bat against him and the moment he sent the ball over the wall Martin found that moment and worked it to his advantage. While some might have found issue with the umpire, Martin simply made him enforce a rule. The Royals protested the umpire's decision and four days later it was overturned by the President of the American League, Lee McPhail. The ruling was the bat should have been removed not the player, Brett's home run counted and the game would be restarted at that point on August 18th, the Royals held onto the lead and officially won the contest 5-4.

The piece of artwork was done by Tim Carroll, he used all pine tar to paint it. Check out Tim's page here: https://www.facebook.com/pages/timcarrollart/108455771845

Watch the incident here: http://www.youtube.com/watch?v=PrTYdlaqtxE Classic.
Posted by Wade Forrester at 12:02 AM