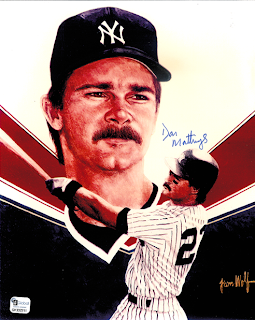 On July 18, 1987, Don Mattingly tied a major league record when he blasted a home run to lead off the fourth inning at Arlington Stadium in Texas. The blast was the eighth game in a row that the Yankees first baseman went yard which had only been done by Dale Long of the Pittsburgh Pirates in 1956, it has since been matched by Ken Griffey Jr. who did it in 1993. The record tying campaign began on July 8th when Mattingly went deep twice in a 13-4 win over the Twins in New York. From there he kept swingin and the ball kept flyin over the walls. Just two days before the record tying shot Mattingly had his second two run home run game which gave him 10 dingers during the stretch. Long and Griffey only hit eight over their eight game stretch. 41,871 fans packed Arlington Stadium, many were there just to see if Mattingly could tie the record, he didn't disappoint. Juan Guzman served up the historic round tripper that cut Texas' lead down to 2-1, one batter later Claudell Washington took Guzman deep to tie the game up. The Rangers responded with three runs in the fifth then two more in the eighth as they knocked Mattingly's Yankees off 7-2. Even though his team lost the game he had accomplished something that is a rarity in baseball to say the least. The next day Mattingly went 2 for 4 but couldn't get one over the fence to make himself the lone record holder, however he had joined a pretty elite club.