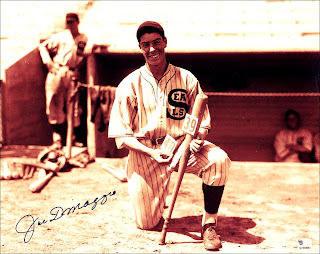 On July 26, 1933, a 19 year old kid by the name of Joe DiMaggio had his record setting 61 game hitting streak come to an end as his San Francisco Seals prevailed 4-3 over the Oakland Oaks. The 61 games in a row with a hit came 3 years before he found his way to the major leagues and 8 years before he shattered the Major League record with a 56 consecutive games with a base knock. Joe found his way to the Seals in October of  '32 when his brother Vince talked the manager of the club into letting him fill in at shorstop. The '33 season would be his rookie season and it would be one to be remembered as the kid began his hitting streak on May 27th of that season then would pick up a hit in every game until that day in late July. Joe said "Baseball didn't really get into my blood until I knocked off that first hitting streak. Getting a daily hit became more important to me than eating, drinking, or sleeping." The day it came to an end Joe went  0 for 5, his final attempt at extending the record was a long fly ball in the ninth that scored the winning run from third. The minor league streak shattered the mark of 49 set by Joe Ness in 1914 and it put Joe on the radar of Major League clubs. He quickly became a highly sought after prospect, a freak injury nearly ended his career in 1934 but Joe bounced back from it. The Seals dealt DiMaggio to the Yankees in November of 1934, he spent one more season in California before joining the New York club where he continued to make history.

Here's a great article by PBS about the 61 game hitting streak: http://www.pbs.org/wgbh/amex/dimaggio/peopleevents/pande07.html