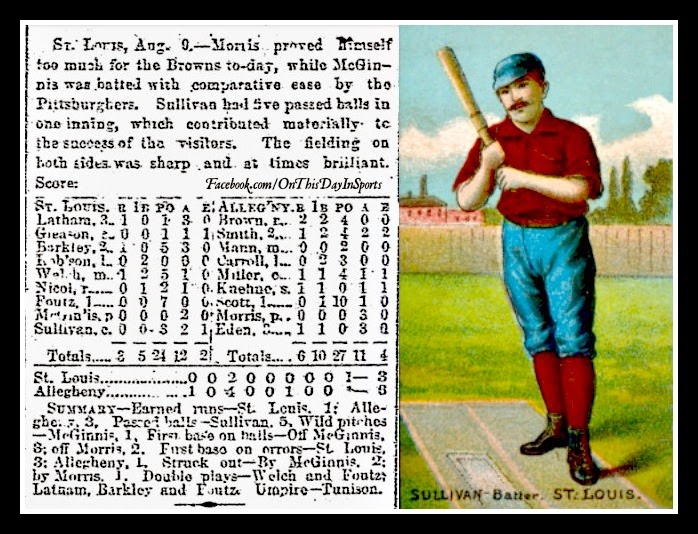 On August 9, 1885, Dan Sullivan of the St. Louis Browns set a major league record for passed balls in an inning when five got behind the catcher. The record setting performance came in the third inning at Sportsman's Park in St. Louis, and proved to hurt the Browns greatly as the Pittsburgh Alleghenys scored four runs in the inning en route to a 6-3 victory. The record that no catcher wants attached to his resume, has never been matched or surpassed. There have been two occurrences of four passed balls in an inning during the modern era. The first came in 1954 when Ray Katt of the New York Giants saw the ball get by him four times, then in 1987 Texas' Geno Petralli matched Katt's lowlight performance. A career .233 hitter, Sullivan played just 17 games in 1885, and hit .117. He played one game for St. Louis the next season before his days on the diamond came to an end. While the record that Sullivan set on that day in August of 1885 is not a record that a player would want to obtain, it is a record that has his name being mentioned more than 100 years later. Gotta take what you can get.

Here's an interesting list of passed ball records:
http://members.tripod.com/bb_catchers/catchers/passedballs2.htm
Posted by Wade Forrester at 12:03 AM