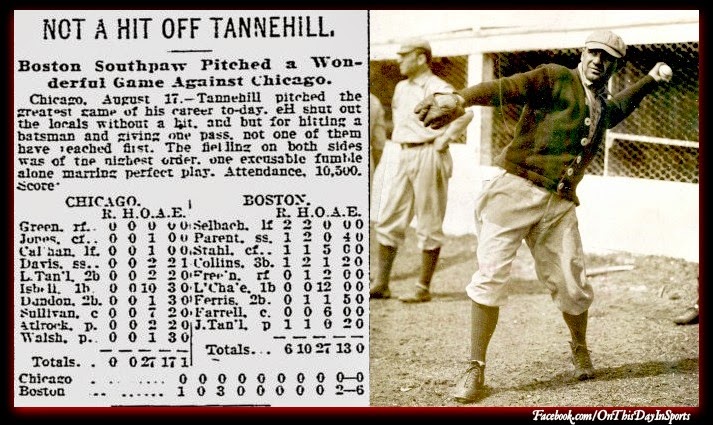 On August 17, 1904, Jesse Tannehill of the Boston Americans turned in a no-hit performance at Chicago's South Side Park. The no-no was just the second in the history of the franchise that would become known as the Red Sox, and had it not been for a hit batsman, and a free pass it would have been the second perfect game in the history of the organization. Cy Young had the honor of becoming the first man to achieve those feats earlier that season. Including both Young, and Tannehill, 18 men have thrown no-hitters as a member of the Boston Red Sox. Tannehill was the first lefty to achieve the feat. The man who stood at just 5' 8" and weighed 150 pounds spent 15 years on the big league diamond. During that time he won 197 games, recorded six 20 win seasons, and had a lifetime e.r.a. of 2.80. He wore the uniforms of the Cincinnati Reds, Pittsburgh Pirates, New York Yankees, Boston Red Sox, and the Washington Senators. He was a part of three pennant winners, and had one achievement that every big league pitcher dreams of, which came on this day 110 years ago.

If you would like to know more about the life and times of Jesse Tannehill  give this a look: http://sabr.org/bioproj/person/03425a5e

Here is the story about Cy Young's 1904 perfecto: http://tinyurl.com/kng4fdf
Posted by Wade Forrester at 1:05 AM