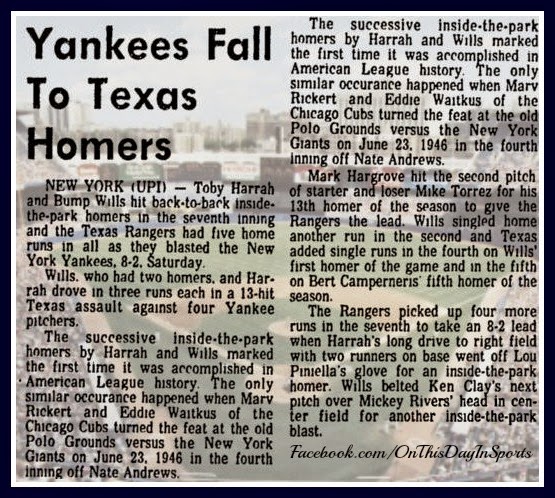 On August 27, 1977, in front of more than 30,000 at Yankee Stadium in New York, Texas Rangers teammates Toby Harrah and Bump Wills became just the second set of players in the history of Major League Baseball to hit back-to-back inside the park home runs.

The Rangers were up 4-2 when the historic back-to-back homers happened in the seventh inning. Ken Clay was on in relief for the Yankees, and he gave up back-to-back one out singles before Harrah stepped to the dish, and gave one of his pitches a long ride into right. Lou Piniella went all out as he tried to make a leaping catch at the wall, only to crash into it, and fall to the ground, as the ball shot back toward the infield. The two men in front of Harrah crossed the dish, and before second baseman George Zeba get the ball into the catcher Harrah had scored.

Moments later, Bump Wills stepped in and drove one to deep center. Mickey Rivers pursued, and even got a little bit of a glove on it, before it shot over his head, and off to his left. Wills kept his head down, and made the turn at third, before crossing the dish with his inside the parker. The inside the park shot was the second home run of the day for Wills, who went the more conventional route in the fourth inning by putting one over the fence.

It was the first time since the feat was accomplished in the American League. The only other time it had been accomplished came during a National League contest at the Polo Grounds in New York when Marv Rickert and Eddie Waitkus of the Chicago Cubs did it in a game against the Giants. Pretty wild stuff. You can watch it here: https://www.youtube.com/watch?v=MzLqCC5eQbU

Check out the box score here: http://www.baseball-reference.com/boxes/NYA/NYA197708270.shtml
Posted by Wade Forrester at 2:32 AM