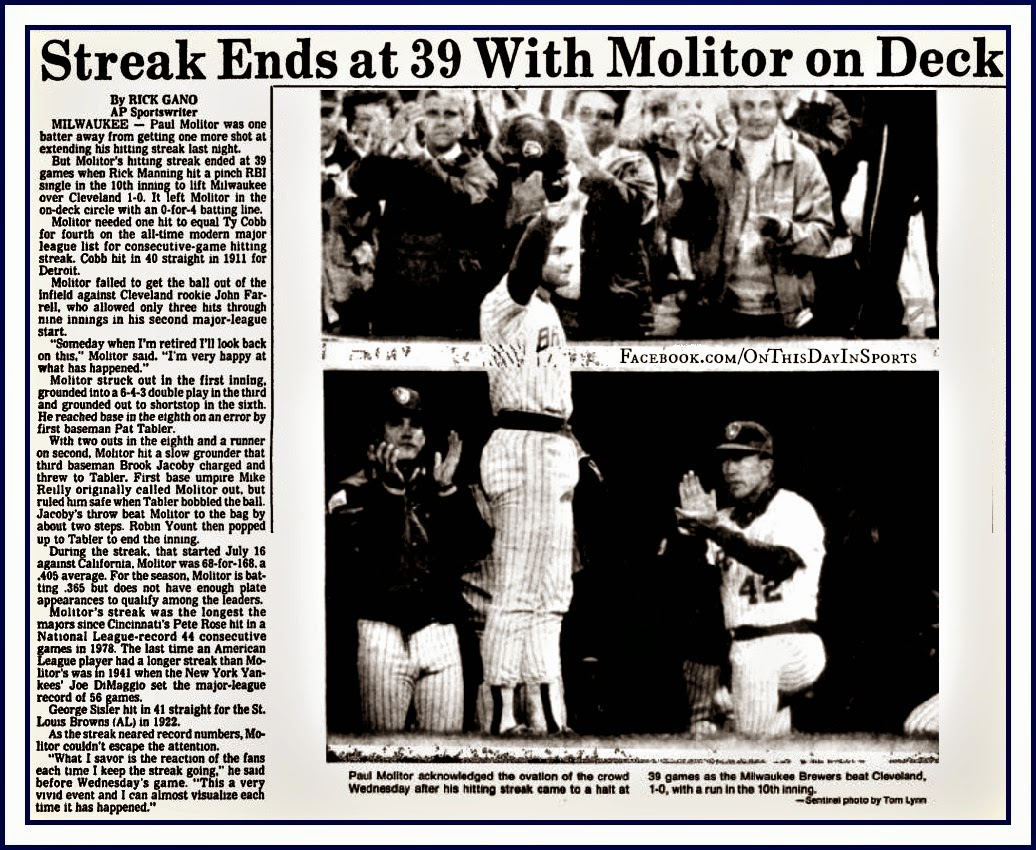 On August 26, 1987, Paul Molitor's 39 game hitting streak came to an end, with the Brewers slugger standing on deck in the 10th inning, as his teammate Rick Manning knocked in the game winning run during a 1-0 win over the Cleveland Indians at County Stadium in Milwaukee. The future Hall of Famer was held hitless in four trips to the plate by rookie hurler John Farrell who turned in a true gem though nine, before handing the ball over to Doug Jones as the game headed into extras. On the flip side Teddy Higuera matched Ferrell pitch for pitch, and he held onto the ball in the 10th, as he searched for his 13th win of the season. It is safe to say that hopes were high that Monitor would get his chance to bat after Higuera got his job done in the top of the 10th, but it just was not in the cards, as Jones hit a man, recorded an out, then put Dale Sveum on with a free pass to get to second baseman Juan Castillo. The Brewers skipper Tom Trebelhorn countered the move by calling on Manning to pinch hit for Castillo, and with Molitor looking on, Manning knocked in the Mike Felder to win it. It was a bittersweet ending the Brewers legend, as they won the game, while the streak came to a close. Even then he said he was cheering on Manning when he came into hit, as he put his team above his own accomplishments. The 39 games was just one shy of Ty Cobb's record of 40 that he had set in 1911. Today it stands as the seventh longest hitting streak in the history of Major League Baseball. When Molitor was asked about his accomplishment after the game he proclaimed that there would be a day when he was retired that he would look back on it fondly. Those days have come, and I am sure when he looks back he cracks a smile.