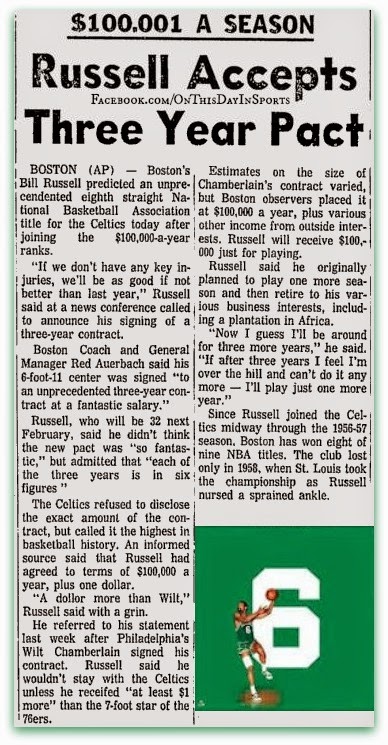 On August 25, 1965, Boston Celtics legend Bill Russell became the highest paid player in NBA history when he inked a deal that would pay him $100,001 per season over the next three years. The one dollar tacked on made him the highest paid man, as Wilt Chamberlain had held that distinction with a $100,000 contract of his own. As a fan it seems like athletes get into pissing contests, and this is a prime example of that as Russell needed that dollar just because. With that said, he had earned his pennies. The big man boldly predicted that he would lead the Celtics to an eighth straight championship title, and he backed it up by doing exactly that. Russell played through the '68-'69 season, and finished his career with 11 championships in 13 years of play. I have always found that it be an absolutely amazing accomplishment, and that alone makes him a true legend of the game.

Just for curiosity's sake I looked at what $100,001 would equate to today, which would be a little more than $755,000. When you look at the money that is being thrown around today it seems like the Celtics made quite the deal for Bill Russell on that day in late August.
Posted by Wade Forrester at 1:32 AM