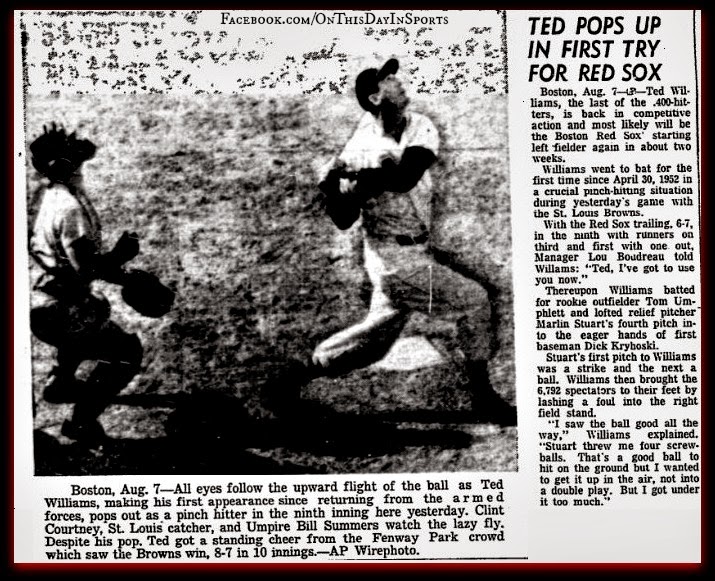 On August 6, 1953, in a game against the St. Louis Browns in Boston, "The Splendid Splinter" Ted Williams returned to the Red Sox lineup for the first time since April 30, 1952. The 34-year-old slugger had been on hiatus for more than a year as he served his country as a fighter pilot during the Korean War. He had joined the club ten days earlier, but had to recover from blistered hands that he suffered during a batting drill. 10 days later he wasn't quite where he wanted to be, but he could swing the stick, and he stepped in as a pinch hitter during the bottom of the ninth trying to help his team rally. The Sox came into that inning down 7-4, but they proved they still had some fight in them, as they knocked in two runs off of two different pitchers, before Ted heard his number called. He came to the plate, with two men on, one out, and a chance to tie things up. Unfortunately for him, his teammates, and the Boston fans there was no storybook ending, as he flew out to first base. The Sox did tie the ballgame and sent it into extras, but St. Louis' second baseman Bobby Young spoiled the comeback by belting a leadoff home run in the top of the 10th that propelled the St. Louis club to an 8-7 victory.

Like the captioned photo accompanied with the article says, the crowd at Fenway were excited as they should have been to see the slugger return. While it was not a triumphant return that was accompanied by a hit, the crowd stood and cheered as he walked back to the dugout. Williams did not return to the lineup as an everyday player until August 16th. He did hit a home run in his second appearance as a pinch hitter three days after that pop out, but he still had to work his way back into the swing of things. It's safe to say Ted did work his way back into that proverbial swing, as he hit .407 in 37 games played. Despite the fact that he was in the latter years of his career, Williams had quite a bit left in the tank. He hit .337 over the last seven years of his career which came to a close in 1960. In two of those years he led the American League in batting average, and during one of those years he led the league with 136 RBIs. The stint in Korea was the last stint for the war hero, who had also served three years during World War II. The fact of the matter is he was lucky to be playing ball after the well documented crash landing while serving during that year in Korea. No matter who you might root for on game day those men who served should always be held in high regard. They were on the biggest team. The team that protected this nation's freedoms.

Check out the box score here: http://www.baseball-reference.com/boxes/BOS/BOS195308060.shtml
Posted by Wade Forrester at 12:11 AM