August 5, 1932: Tommy Bridges Bid For Perfection Is Broken Up By The 27th Man 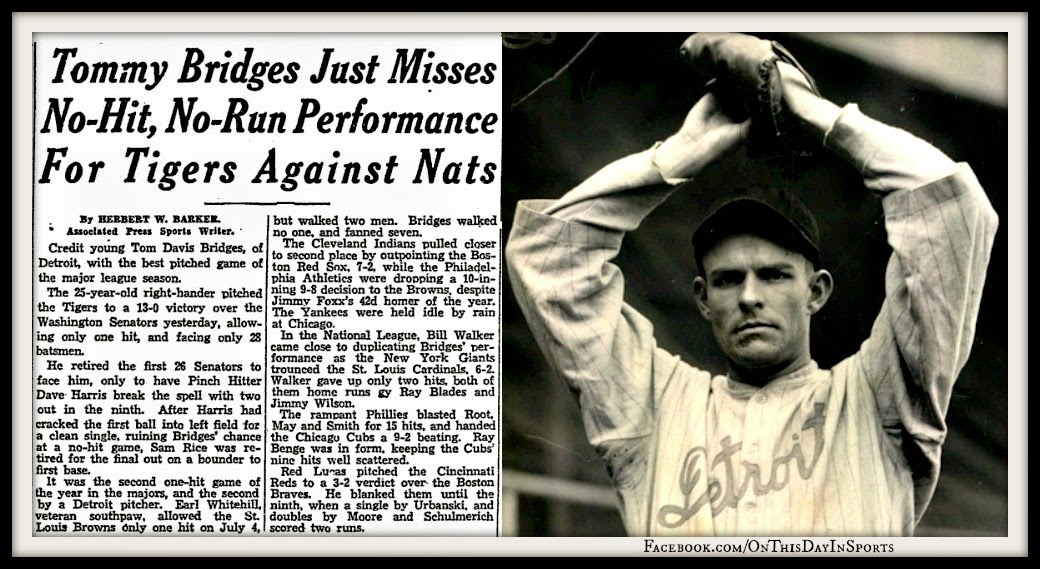 On August 5, 1932, in front of 8,000 fans, at Navin Field in Detroit, Tommy Bridges sat down 26 men in a row, before his bid for perfection was broken up by the 27th man he faced. The Tigers, along with their hurler were in cruise control as they entered the bottom of the ninth up 13-0 over the visiting Washington Senators. He took the first two men down with ease, before pinch hitter Dave "The Sheriff" Harris spoiled perfection by dropping a single into left. The 194 game winner would toss two more one hitters in his major league career, and the second of the two was broke up in the ninth. He never did capture the elusive no-no at the highest level, but he did lay claim to a no hitter as a member of the Portland Beavers in April of 1947 when he no-hit the San Francisco Seals.The six-time All Star was also a two-time World Series champion with the Tigers. His first championship came in 1935, and the latter came in 1945 when his career was coming to a close. While he might not have achieved perfection, Bridges one hit performance is most definitely a noteworthy accomplishment from baseball's past. Oh so close...

If you would like to learn more about Tommy Bridges take a look at this:
http://sabr.org/bioproj/person/f8cf51bc

Posted by Wade Forrester at 1:46 AM