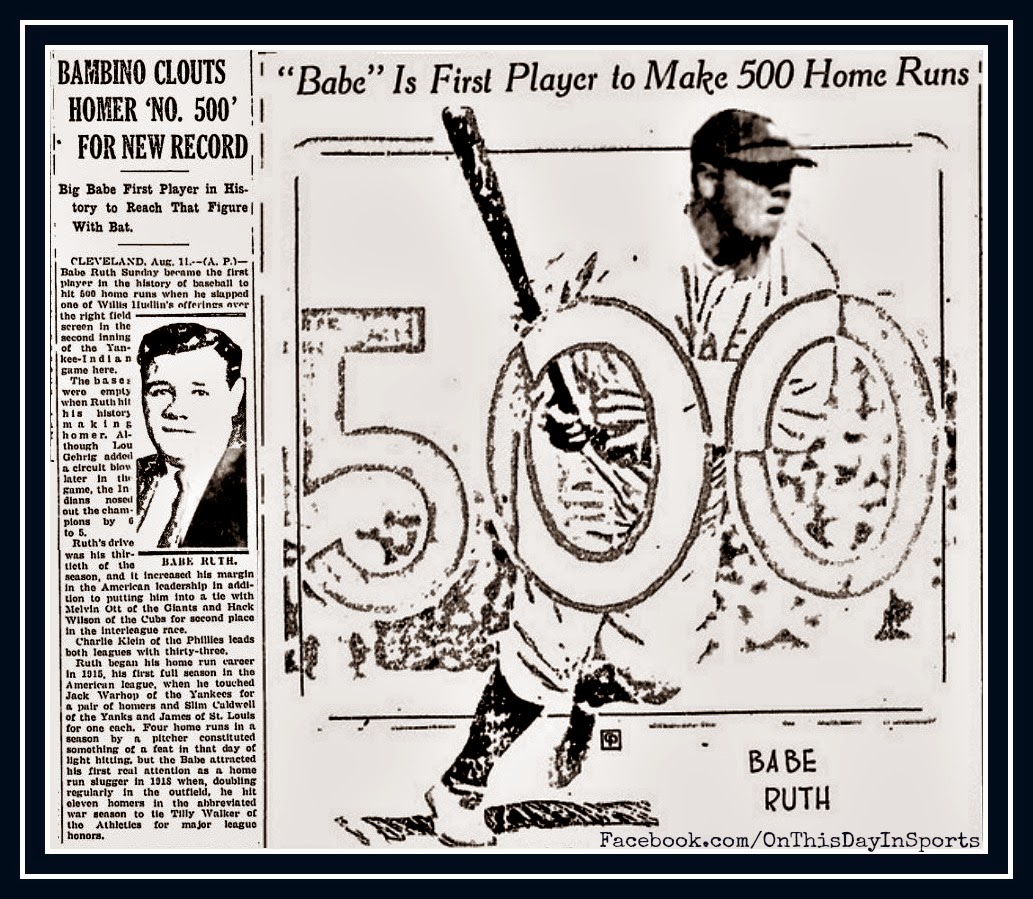 On August 11, 1929, Babe Ruth became the founding member of the 500 home run club. The milestone came during the second inning of a game against the Indians at League Park in Cleveland. The solo shot off of Willis Hundin got the scoring started for the day. With addition of a big blast by Lou Gehrig later in the game the Yankees could not hold on, as they fell 6-5 against the hometown squad. Ruth's first home run came on May 6, 1915. He was a Boston Red Sox pitcher with a little pop in his bat. He hit four that year. If he had hit three more he would have been tied for the league lead. That pitcher with pop developed into an outfielder with pop by 1918. He led the league with 11 home runs during that 1918 season, and in 1919 he led the league once again when he belted 29. The story was just getting started for the man who finished his career with more than 700 home runs.

Ruth only got better after the Sox sold him to the Yankees. He led the league in big blasts 10 more times wearing the pinstripes in New York. The slugger hit 40 home runs or more for the Yankees during 11 of his 15 years with the club. He had taken over the all time home run lead in 1921 when he surpassed Roger Connor's record of 138 that had been set in 1897. Every home run that followed was a record breaker, as Ruth broke his own record time and time again. He would later become the founding member of the 600 home run club, and the 700 home run club as well. Ruth's last three home runs came on 1935. Fitting that he would park three in the seats on one day to put an exclamation point on 714 big blasts. His record for career home runs stood until Hank Aaron surpassed it in 1974.

Today only 26 men have reached the 500 plateau in their careers. Five have hit 600 or more, and only three have hit 700 or more. While Ruth's numbers have been surpassed he will forever be known as the man who set the first true benchmark when it came to the big fly. There will always be a debate amongst the fans of the game as to who was the greatest hitter of all time. It is safe to say that a man by the name of George Herman Ruth has his place in that argument. His towering drives thrilled fans for many many years. They made him a legend, and as I like to say... legends live forever.

The Bambino's home run log. Interesting fact to boot, 10 of Ruth's 714 were inside-the-park shots: http://www.baseball-reference.com/players/event_hr.cgi?id=ruthba01
Posted by Wade Forrester at 2:27 AM