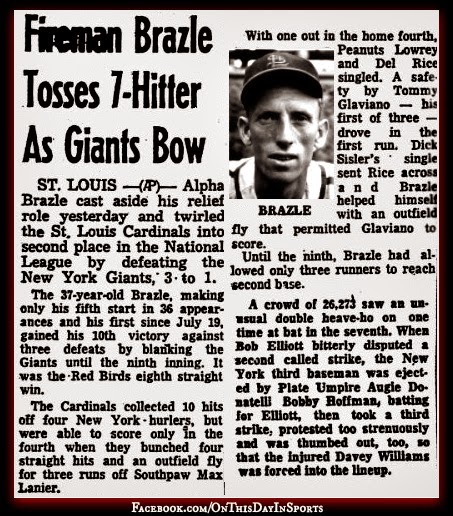 On August 23, 1952, Cardinals hurler Al Brazle allowed just seven hits en route to a 3-1 victory over the New York Giants at Sportsman's Park in St. Louis. This game was rather unusual because in the seventh inning two players got tossed from the contest during the same at bat.  The unusual heave-ho as the papers of the day called it happen in the seventh inning when Bob Elliott was infuriated by a second called strike. The second baseman proceeded to kick dirt on umpire Augie Donatelli before the ump gave him the boot. Bobby Hoffman came into bat for Elliott, and when Donatelli called him out on the third strike Hoffman flew off the handle and was ejected as well. As it turned out an injured Davey Williams came into the contest, and knocked in the lone Giants run of the day in the ninth. After Brazle notched the last out of the game the reported crowd of 26,673 made their way out of the ballpark, and had more to talk about than just a win, as Elliott and Hoffman put on a quick show in the seventh.

Check out the box score here: http://www.baseball-reference.com/boxes/SLN/SLN195208230.shtml
Posted by Wade Forrester at 3:22 AM