On August 29, 1977, St. Louis Cardinals outfielder Lou Brock became the all time stolen base leader, after swiping two bags against the Padres in San Diego. The legendary base burglar came into the contest one stolen base shy of Ty Cobb's record of 892, and by the seventh inning he hoisted second base over his head as baseball's king of thieves.

Brock was off and running right out of the gate. He worked a walk out of San Diego's starter Dave Freisleben to lead off the contest, and moments later he made a break for second. San Diego's catcher Dave Roberts attempted to gun him down, but sailed his throw wide, so Brock had not only equalled the mark, he had also taken third on the error. It proved to be a spark for the Cardinals offense, as they went onto plate three runs in the inning that had saw their entire lineup take an at bat.

The Friars bounced back with a couple of runs in the third to cut the lead to 3-2, and that is where the score sat when Brock came to the plate in the seventh. He had just watched his pitcher rap out a single, and was hoping for a few more sparks. Instead he hit into a fielder's choice that retired the pitcher, but it still gave him the opportunity to make history, and it was an opportunity that would not be wasted. Freisleben was still on the bump for San Diego, and this time Brock broke on his first pitch. Once again Roberts tried to gun him down, but the throw was off line, and Brock came sliding into second as the baseball's all time stolen base leader.

Brock's first concern was Bill Almon. The San Diego shortstop had gotten spiked on the play, and Brock wanted to make sure he was not injured. Once he realized he was okay a mob of teammates formed around him. The base was uprooted and awarded to him, and he was given a microphone to address the cheering crowd. He reminded them to not just think of him on that day, but to think of Cobb as well. He had a great respect for the player who he had began chasing in 1962, and his words made it be known. The fans in San Diego made it be known that had great respect for Brock as well as they bestowed cheers upon him. It was an all around classy moment in time. 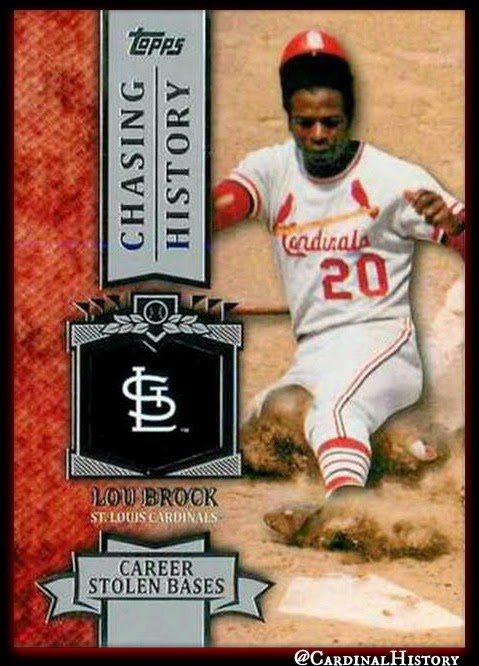 After things settled down, Brock and company failed to scratch out a run in the inning, and the speedster was removed before the bottom of the frame began. The day was spoiled a bit thereafter, as Al Hrabosky served up a two run shot ot Mike Ivie in the eighth. The big blast proved to be all the Padres needed to win the game 4-3. However, it was still a day to be celebrated, as Brock's achievements were much bigger than the game that was played on the field that day.

Like many who are in pursuit of a record, Brock was relieved to have it out of the way. He spoke of reaching a 1,000 stolen bases. It was a number that was not too far off, but it proved to be a number that he would not reach, as he played two more seasons, before retiring with 938 stolen bases. Brock's record stood until 1991 when it was surpassed by Rickey Henderson. While Brock's record did not stand the test of time, what he did on the diamond will not be forgotten, as he stands amongst those who are considered immortal in Cooperstown, New York.