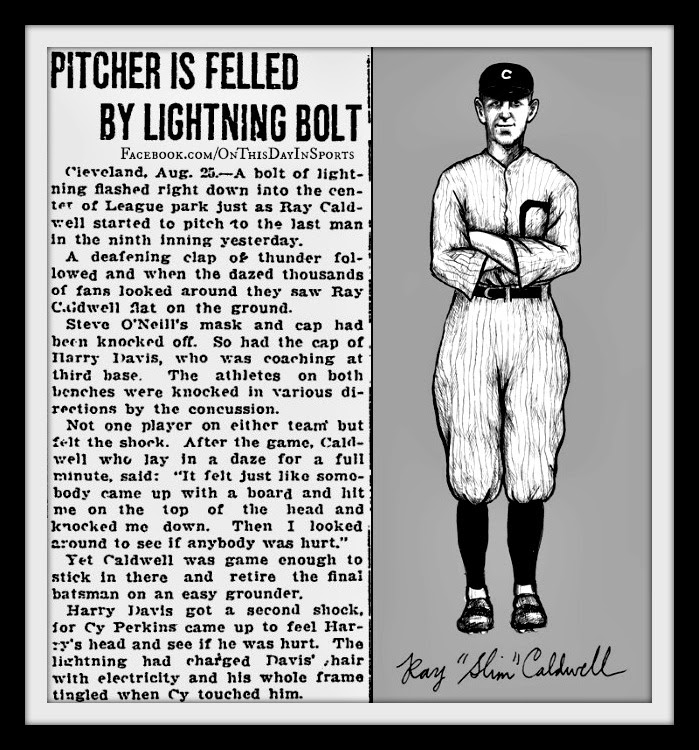 On August 24, 1919, in his first start in an Indians uniform, hurler Ray Caldwell looked to be cruising to a 2-1 victory over the Philadelphia Athletics at League Park in Cleveland when the unthinkable happened, as a bolt of lightning struck the field right before he was set to face his last batter. The bolt knocked Caldwell out, while the thunder that followed knocked the cap off of the man coaching third as well as the catcher's mask who was waiting on Caldwell's delivery. The stunned crowd looked at Caldwell laying on the mound not knowing if he had survived the strike, but to their surprise he got up off the ground, and recorded the final out of the game. Absolutely amazing. I ran across this fact a few years ago. It was before I had extended my means of research, and I will not lie I was somewhat skeptical of the story. However, this account that is featured in the picture is confirmation, as it was printed the next day in the Pittsburgh Press. I did not doubt that it happened, I simply wondered if the tale had been told accurately, or if it had been stretched a bit. As it turns out the newspaper accounts from the following day (I found several) not only confirmed the story, they also made it that much more remarkable.  Caldwell won 134 games in his major league career. One of those wins involved some of the most unusual circumstances in the history of the game.

You can read about the life and times of Ray Caldwell here: http://sabr.org/bioproj/person/8311d756
Posted by Wade Forrester at 1:41 AM