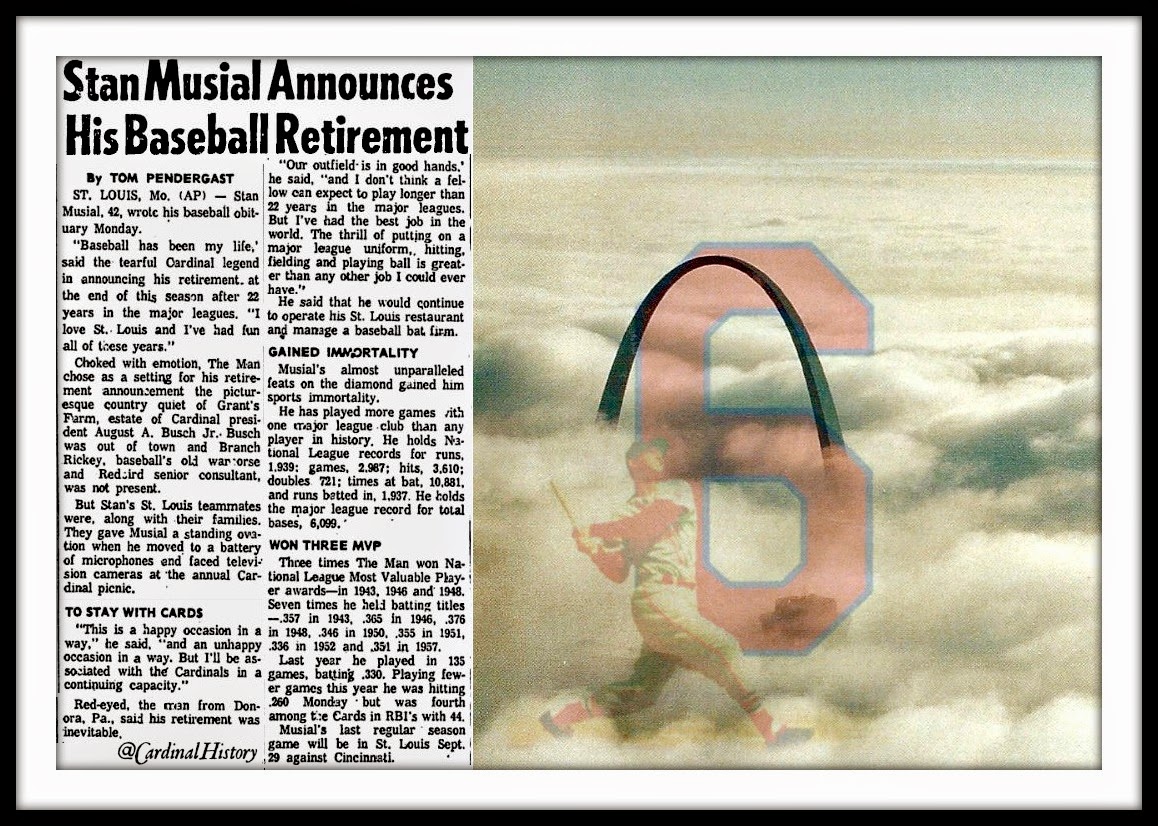 On August 12, 1963, St. Louis Cardinals legend Stan "The Man" Musial announced that he would be retiring at season's end. The tearful announcement came at the team's annual picnic that was held at Grant's Farm right outside of St. Louis. Musial said "Baseball has been my life. I love St. Louis, and I've had fun all these years." It was 22 years to be exact. Which included 24 All Star appearances, 7 batting titles, 3 World Series Championships, 3 MVP awards, and he led the National League twice in RBIs. Musial held or shared 17 records at the time of his retirement, and he was also the owner of 29 National League records.

Stan Musial first stepped on the big league diamond for the first time on September 17, 1941. He went 2 for 4, with a double, and two RBIs, as he helped lift the Birds to a 3-2 victory over the Boston Braves in the second game of a doubleheader. 3,025 games later he stepped on the big league diamond for the last time. The date was September 29, 1963, and Musial knocked in a run with a 2 for 3 performance that helped the Birds win a game against the Cincinnati Reds that went 14 innings, before he celebrated his last victory.

It was the end of an era on the diamond, but the story of Stan Musial would continue to be written for many years to come, as he served as a member of the front office through 1967, and after those days came to a close he remained a staple of the St. Louis community until he passed away in January of 2013. Musial appeared at the stadium to the delight of the St. Louis fans many times through the years, and I can tell you as someone who was there for a handful of those times I truly felt honored to be in his presence, even when I was sitting in the highest seat in the house. I was also one of many St. Louisans who paid my respects at the public wake when he passed, and that day I felt that it was an honor as well. I was in the presence of a legend one more time. 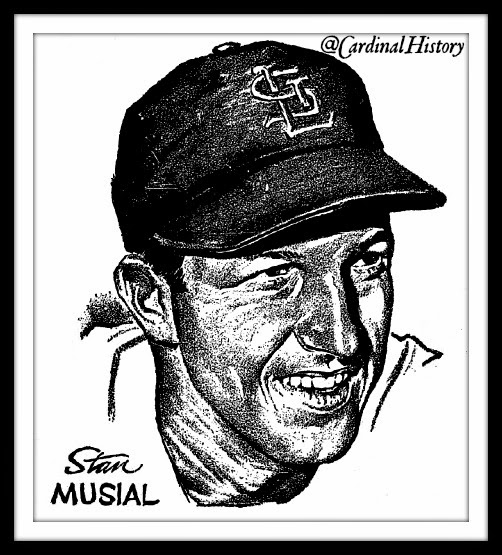 Something that is greater than any record or accomplishment that Stan Musial achieved is who he was as a person. He would stop and sign an autograph for anyone, and he made it be known that he loved the fans just as much as they loved him. One of most genuine athletes that has ever lived wore the number 6 on his back in St. Louis. He heard Father Time knock on his door on this day many years ago, and he answered. While that door had to be answered, his life will forever be celebrated in St. Louis and beyond. He joined the ranks of baseball immortality at the Baseball Hall of Fame in 1969.  I know I said this in yesterday's blog, but I am going to say it again. Legends live forever.

Stats of a legend: http://www.baseball-reference.com/players/m/musiast01.shtml My favorite Stan stat will always be the fact that recorded 3,630 hits total. 1,815 of them came at home, and 1,815 of them coming on the road. A perfect split for baseball's perfect knight.