August 13, 1947; Willard Brown Touches Them All at Sportsman's Park 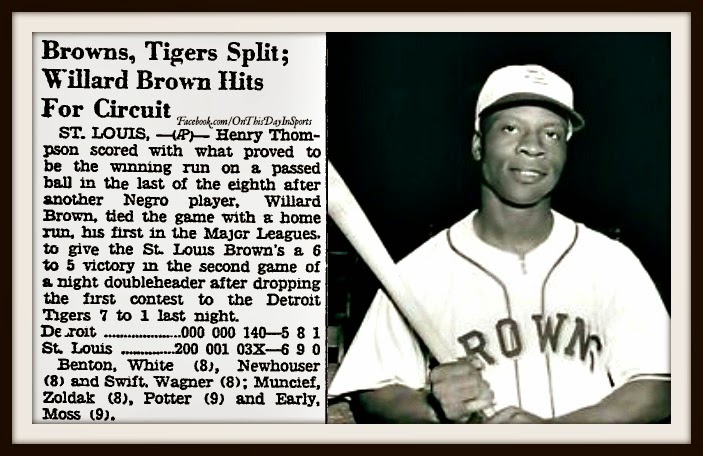 On August 13, 1947, Willard "Home Run" Brown of the St. Louis Browns became the first African American player to hit a home run as a member of the American League.

The historic shot came in front of a home crowd at Sportsman's Park in St. Louis during the eighth inning and tied the ballgame. To top it off it was an inside the parker off of future Hall of Famer Hal Newhouser who was on the bump in relief for the visiting Tigers. The homer not only tied things up it also sparked the Browns to a 6-5 win, that was capped off when Hank Thompson scored on a passed ball later in the inning.

Thompson, along with Brown were the first two African Americans to play for the American League club that called St. Louis home. Unfortunately it seems that neither of them got a true shot with the team. They had each starred for the Kansas City Monarchs before Bill Veeck brought them to St. Louis, and I am sure they had high hopes as they made the trip across the state. Those hopes were dashed, as Thompson ended up playing in just 27 games for the club, while Brown played just 21. Thompson did go onto play eight years with the New York Giants, but Brown did not return to the major league diamond. That did not mean his career was over. He returned to the Monarchs, and played with several other teams until 1957.

The link I will provide below is to a biography about Willard Brown. Let me tell you he was a badass. He had his flaws like every other man who has blood flowing through his veins, but his career earned him a plaque in Cooperstown. Something that stuck out when I read the bio, was the bat that was used to hit the historic home run was not his bat, and the player that had let him use it broke it instead of letting him use it again. It is very sad that his own teammate had that kind of hate in his heart to do that just because of the color of the man's skin. I like to think that we as a society are always moving forward, and there is no doubt we have come a long way. With that said, there is a long way to go, and for every two steps forward there is something out there that pushes us back a step. The important thing is we continue to take those two steps forward. You can push us back one, we'll take two.

The last paragraph means a lot to me because of the recent events out of Ferguson, Missouri. It is very close to where I live, and it saddens me. Everything about it saddens me. A young man is dead. There have been riots, looting, and businesses burned. Simply put it is a terrible situation. So we have been pushed back a step. It is time to take two steps forward. We must keep moving forward.

Here is that bio I spoke of: http://coe.k-state.edu/annex/nlbemuseum/history/players/brownw.html