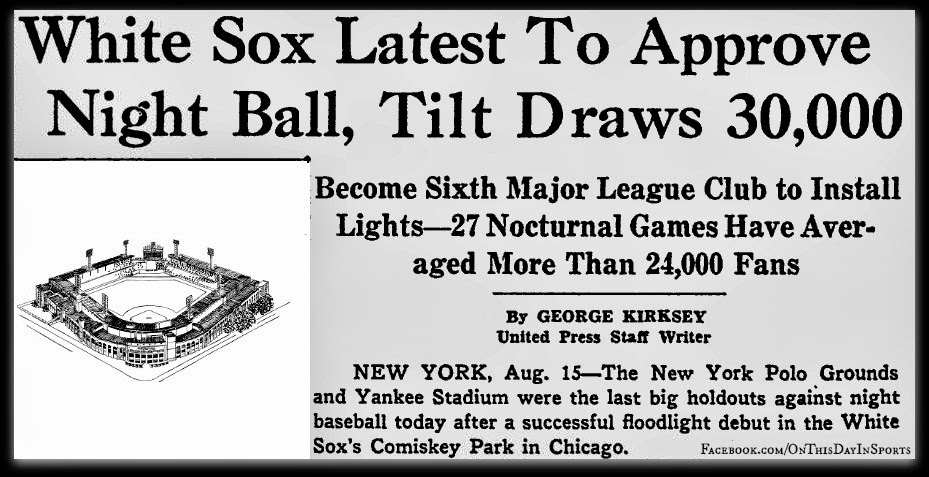 On August 14, 1939, baseball was played under the lights in Chicago for the first time at Comiskey Park. The White Sox celebrated the occasion by knocking off the St. Louis Browns 5-2 to the delight of the estimated 30,000 fans who walked through the turnstiles that night in mid August. The star of the game was Johnny Rigney, as he struck out 10, while allowing the two runs on just three hits. On the offensive side of the ball the Chicago club rocked out 13 hits, and  every man in the starting lineup besides shortstop Luke Appling had a hit under his belt. According to the Pittsburgh Press the only reason Rigney did not get the shutout was Appling had committed the only two errors of the game in the sixth, and juggled no less than four double play balls which led to both of St. Louis' runs. Rigney had been perfect up to that point, but he did not let it bother him, as he went back to work, and got the job done on the illuminated diamond.

Comiskey was the sixth park to install lights, and as time marched on every ballpark in America would follow suit. Although, it was another 49 years before the White Sox's crosstown rival Chicago Cubs would turn on the lights at Wrigley Field. Today the idea of a ballpark not having lights sounds almost crazy, but there was a time that all games were played during the day, and before lights came along there were many games called because it is a little hard to play in the dark. You can view the list of dates that each and every parked flipped the switch here: http://www.baseball-almanac.com/firsts/first10.shtml.