On July 6, 1986,with 18,000+ in the seats at Fulton County Stadium in Atlanta, Braves first baseman Bob Horner became the 11th man in the history of Major League Baseball to belt four home runs in one contest. Unfortunately, Horner's historic day at the plate did not translate into a win for his club who fell to the Montreal Expos by the score of 11-8. 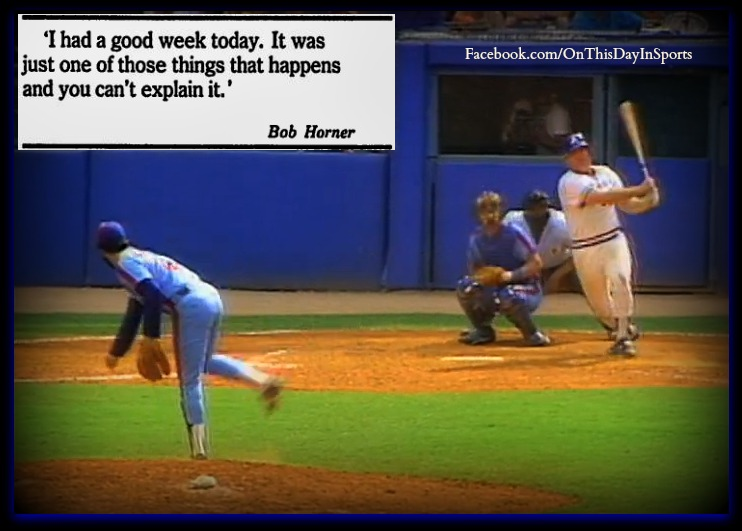 Horner's run into the record books began with a solo shot off of McGaffigan in the second, he connected on a another solo shot off of McGaffigan in the fourth, then he blasted a three run shot in the fifth that ended McGaffigan day. While Horner was knocking the cover off the ball, the Expos were teeing off on Atlanta's pitching staff. By the time the ninth rolled around Horner's club was in an 11-7 hole. He was the third man up, and had a guaranteed shot at joining the select club of men who had put four over the wall in one game. The pitcher, Jeff Reardon, had been called on in the eighth to finish things off. Reardon picked up two quick outs in the eighth, and two quick outs in the ninth, then Horner gave one of his pitches a long ride into the books. Even though they watched their home team lose, the crowd in Atlanta was buzzing as the final out was recorded.
To date, the number of men who have hit four home runs in one game stands at 16. Only two of those 16 men suffered a loss at the end of the day, with Horner being the second of the two. The other man who accomplished the feat in a losing effort came almost 90 years earlier on July 13, 1896 when Ed Delahanty of the Philadelphia Phillies blasted four, but ended up on the wrong side of a 9-8 score.
Check out the box score here: http://www.baseball-reference.com/boxes/ATL/ATL198607060.shtml
Watch Horner's fourth blast here: https://www.youtube.com/watch?v=KRCirRxKOOI
Posted by Wade Forrester at 2:32 AM