July 25, 1956: Roberto Clemente Belts An Inside The Park Grand Slam In Walk Off Fashion 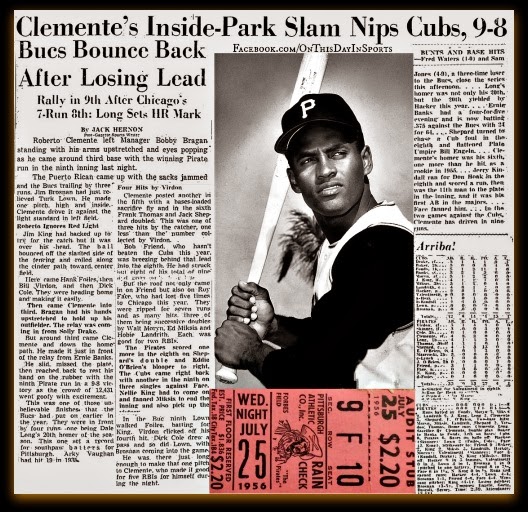 On July 25, 1956, Roberto Clemente belted a walk off inside-the-park grand slam at Forbes Field which propelled his Pittsburgh Pirates to a stunning 9-8 win over the visiting Chicago Cubs. The Cubs had broke out big in the eighth with seven runs that gave them a 7-4 lead, the Bucs came back in the bottom of that inning with a run, but watched the Cubs take it right back with a run in the top of the ninth. Up 8-5 the Cubs skipper Stan Hack called on Turk Lown to shut the door, but the reliever got himself in trouble by loading the bases, with two walks and a single. Realizing that Lown was quickly melting down, Hack called on Jim Brosnan to go after the 21-year-old Clemente who took the first pitch he saw and drove it all the way to the left field wall. It looked to be a game tying triple until Clemente blew through a stop sign,as the ball got away from the outfielder, the ball was relayed into Ernie Banks, and Clemente hauled ass to the plate. As the throw by Banks was reaching the dish Clemente slid past, but reached back just before a tag could be applied. As the Pittsburgh Post-Gazette put it "the crowd of 12,431 went goofy with excitement" while Clemente and his teammates celebrated the spectacular finish.

Clemente hit 240 home runs during his Hall of Fame career. 10 of those were of the inside-the-park variety. Only one of those 10 was a walk off shot, which just so happened to be one of seven career grand slams. As far as the big fly goes Clemente enjoyed Cubs pitching more than any other, as he took them deep 41 times. The Cincinnati Reds were second on the list, as they surrendered 40 bombs to the Pirates legend.

Check out the box score here: http://www.baseball-reference.com/boxes/PIT/PIT195607250.shtml
Posted by Wade Forrester at 2:01 AM