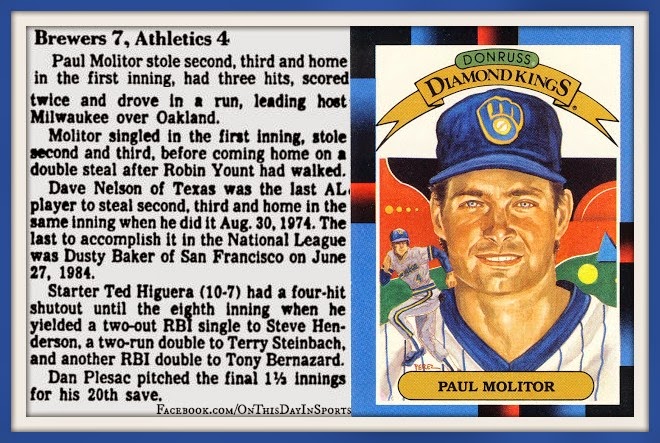 On July 26, 1987, Brewers legend Paul Molitor completed the stolen base cycle during a 7-4 win over the Oakland Athletics at County Stadium in Milwaukee. The Milwaukee DH led the first inning off with a single off of Dennis Lamp, then swiped second in the blink of an eye, and took third when Ernest Riles grounded out. The feat was completed after Robin Yount walked, before a double steal was executed as first baseman Greg Brock stood at the dish ready to take a swing. The A's catcher Terry Steinbach called for a pitch out in anticipation of the thievery, but I don't think he anticipated Molitor's dash for the plate, as he fired to second trying to gun down Yount. The A's shortstop saw Molitor make his break, and cut the ball off and fired it home. The ball went to the first base side of the plate as Molitor came in with a head first slide. The run was just the beginning of a great day for those in the stands in Milwaukee as they watched their club build a seven run lead after six. The A's rallied in the eighth with four runs, before Dan Plesac came in and earned a four out save.

To date, only 40 men have completed the stolen base cycle in one inning. Ty Cobb and Honus Wagner each achieved the feat four times, while Max Carey and Jackie Tavener did it twice. Molitor was the first man to achieve the feat in a Brewers uniform, and it has not been matched by a member of the Milwaukee squad since. The last person to achieve the feat was Dee Gordon of the Los Angeles Dodgers who did it in July of 2011. Thanks to Baseball Almanac for the comprehensive list that can be viewed here: http://www.baseball-almanac.com/feats/stealing_second_third_home.shtml

Check out the box score here: http://www.baseball-reference.com/boxes/MIL/MIL198707260.shtml
Posted by Wade Forrester at 1:04 AM