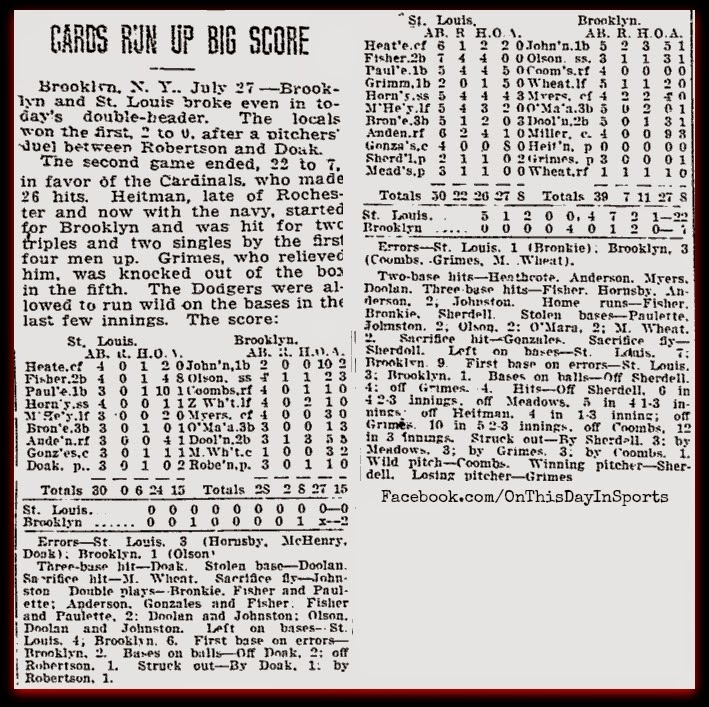 On July 27, 1918, Henry Heitmann of the Brooklyn Robins played out one of the shortest careers in the history of Major League Baseball, when he started the second game of a doubleheader versus the St. Louis Cardinals in Brooklyn. Heitmann faced just four batters, and they each picked up a hit off of him before he was pulled from the contest. On top of it each of those came around and scored. Heitmann never played in another major league contest again, which led to a lifetime E.R.A. of infinity, and put him in a club that no major league would want to join.

The Robins had taken the first game of the doubleheader by the score of 2-0, but their luck would be much different in the second tilt as the Cardinals knocked them off by rapping out 26 hits, and scoring 22 runs en route to a 22-7 blowout. The 21-year-old kid who had just been called up from the minors and was a solid pitcher at the lower levels. It might be too bad that he never got a chance to redeem himself at the major league level, but if he had we might not know his name today. Heitmann joined the Navy immediately after the contest, although, he was back in Rochester within the year. According to his stats that will be provided below, he played minor league ball until 1928, and carried a 3.27 earned run average throughout his minor league career. He also won 17 games twice. Not too shabby.