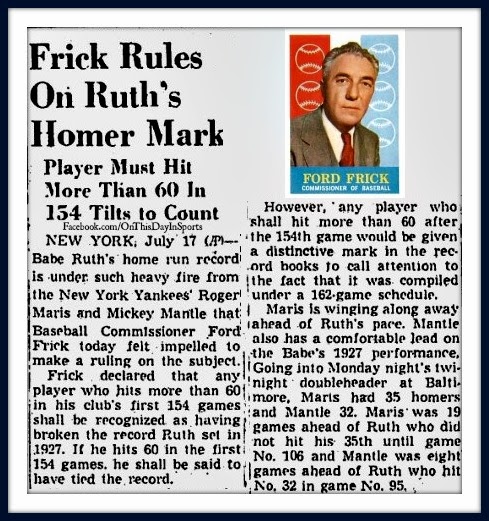 On July 17, 1961, the commissioner of baseball Ford C. Frick ruled that if any player surpassed the home run record in more than 154 games an asterisk would stand next to their name in the record books. The asterisk never actually appeared in a record book, but Ruth was considered the true home run king until 1991 when an eight member committee voted to remove it.

The record had been set by Babe Ruth in 1927 when he belted 60 homers, and that 1961 season had brought about one of the greatest home run chases of all time, as Mickey Mantle and Roger Maris tore the cover off the ball at a record breaking pace. Mantle fell short of the mark with 54 big blasts, while Maris broke the record on the final day of the season. If the season had ended in the 154 games that Ruth had played, Maris would have fell two short with 58 homers. He tied the record in game 159, and hit 61st blast in game 163. The Yankees had played to a tie early in the season, which warranted an extra game.

Breaking the coveted home run record proved to be a blessing and a curse for Maris. It was not celebrated by many, as they did not want to see a new guard take the post from the old. In my humble opinion the ruling by Frick is one of the great travesties from baseball's past. Maris would say later in life that he felt slighted by it. He should have. It seems that Maris' '61 season has been celebrated much more in the years that followed than when it was actually occurring. The story has been well documented, as Maris had suffered such great stress during the chase that he could not sleep at night, and his hair fell out. I have always looked it as such a great feat with such a sad undertone, and Frick's position added to the latter.

While the asterisk was removed by the committee in 1991, Maris did not live to see the day. He passed away in 1985. I can understand the position of the former commissioner, and even do think there is no harm in mentioning that the schedule had been extended when Maris broke the record. Making the man feel slighted the rest of his life because the powers that be decided to add a few games to the schedule was wrong. He did not add the games to the schedule, and he should not have been penalized for doing what no man had done before him. My personal belief is Frick had misguided values, and had he known how the history books would be written he might have changed his tune. Overall his tenure as commissioner was successful, however, the * decision was one that was controversial to say the least. What we do know is Roger Maris put together one of the most remarkable seasons in the history of the sport, and today many consider him the true home run king. Although there has not been an asterisk inserted beside the names that  might truly deserve it.