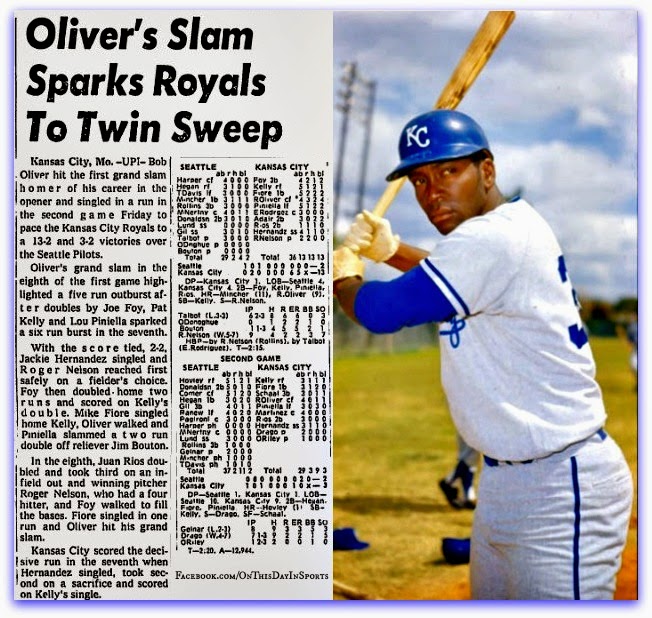 On July 4, 1969, during the first game of a doubleheader at Kansas City Municipal Stadium, centerfielder Bob Oliver hit the first grand slam of his career, and it was also the first grand slam in the history of the Royals organization during a 13-2 victory over the visiting Seattle Pilots. It took 79 games for one of the men on the expansion roster to achieve the feat, and as soon as Oliver's ball cleared the wall he would forever be the answer to a trivia question. Oliver helped the cause in the second game as well, by knocking in a run that helped lift his club to a 3-2 victory to complete the doubleheader sweep.

Oliver spent eight seasons in the big leagues. He landed with the Royals in the expansion draft, and led the team with 13 homers, while carrying a .254 average. Earlier in that rookie campaign, on May 5th to be exact, Oliver became the first Royal to pick up six hits in a game, a feat that has only been accomplished twice since. He carried his success over and made some serious noise with the lumber in 1970 as he parked a career high 27 in the seats. Oliver's power numbers dropped off significantly in '71, and in the Spring of '72 he was traded to the California Angels. He hit 19 homers for the Angels that season, then followed it up with an 18 home run campaign. Oliver was dealt to the Orioles in '74 during, before joining the Yankees in '75, before being released after appearing in 18 games. He tried to comeback in '76 with the Phillies who shipped him to the White Sox in the Spring, but he never did appear in another major league contest.

Happy 4th of July to each and everyone of you, and thank you to all the men and women who have served, or are currently serving. Be safe out there.
Posted by Wade Forrester at 1:28 AM