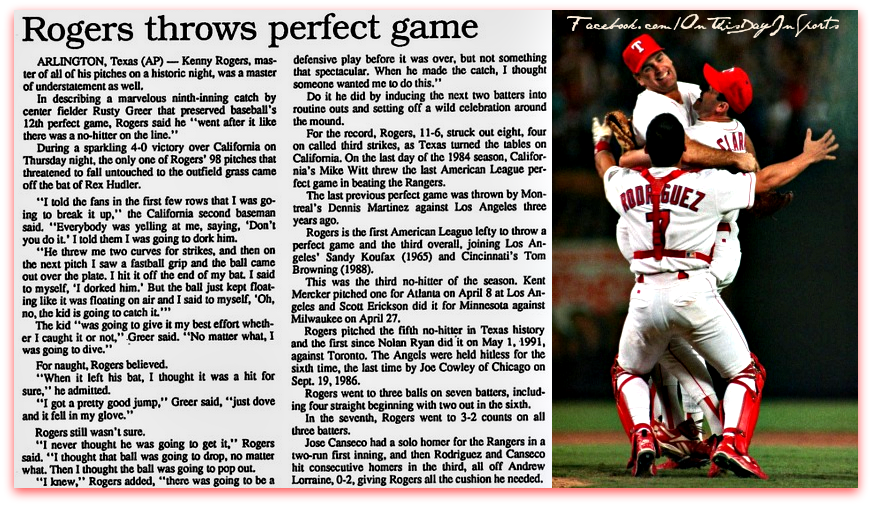 On July 28, 1994, in front of a home crowd of more than 46,000 in Arlington, Texas Rangers hurler Kenny Rogers became just the 12th man in the history of Major League Baseball to achieve perfection during a 4-0 win over the California Angels. The perfect game also made Rogers the first left handed pitcher in the history of the American League to achieve the feat. The Rangers had jumped out to a 2-0 lead in the first on a solo shot by Jose Canseco, and an RBI off the bat of  Dean Palmer. The Rangers tacked on their other two runs in the fourth with back-to-back home runs by Canseco and Pudge Rodriguez. At that point Rogers looked to be in cruise control, and he would continue to cruise until Rex Hudler stepped to the plate to lead off the ninth. While Hudler was getting ready to face Rogers he was telling the fans in the front row that he was going to break it up, and he damn near did when he gave a fastball a long ride into right that looked like it was a sure hit, before rookie Rusty Greer made an absolutely spectacular diving play in right center that preserved the perfecto. The near hit by Hudler was the only true threat by the California squad. Rogers finished things off by getting catcher Chris Turner to ground out, and moments later shortstop gary Discarnia shot a routine fly ball to center. The moment Greer recorded that 27th out, a celebration ensued. Perfection had been achieved. Watch the final inning here: https://www.youtube.com/watch?v=iYdQKQ1V8pM

Check out the box score here: http://www.baseball-reference.com/boxes/TEX/TEX199407280.shtml
Posted by Wade Forrester at 12:56 AM