On July 15, 1901, with 5,000 fans in the stands at Robison Field in St. Louis, Christy Mathewson tossed the first no-hitter of his Hall of Fame career, as he led the way to a 5-0 win for the New York Giants over the hometown Cardinals. According to the Sporting News the fans cheered Mathewson even though he was mowing down the hometown club. They were witnessing history being made.

The no-no came in the final game of a four game of the series, and was a redemption of sorts, as Mathewson had lost the first game 1-0 after being victimized by errors. To make things worse for the New Yorkers they dropped the next two games as well. Mathewson put an end to that streak in grand fashion by tossing the no-no. The big hurler walked four, and had another man reach on an error, but not one Cardinals batter reached cleanly. The Sporting News reported the no-hitter was preserved by a sensational grab by outfielder Kip Selbach, and throws by George Davis at third, as well as Charlie who was holding down the shortstop position.

Mathewson would throw the second and final no-hitter of his career on June 13, 1905. That 1905 season was one that would help the hurler known as "Big Six" achieve legendary status, as he pitched three shutouts in the Fall Classic as he won his first title. Simply glancing at his stats will make you understand how absolutely great he was. I really enjoy the short bios that are on the National Baseball Hall of Fame and Museum's website, so I am going to quote it today, much like I did with the Sisler story the other day. 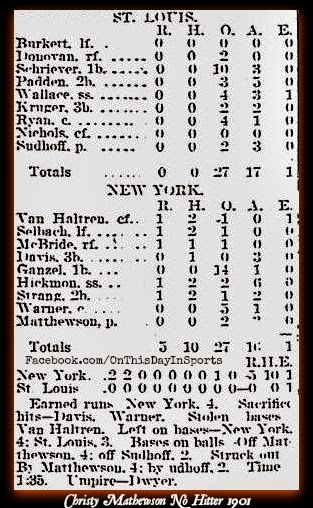 "As charismatic and popular as any player in the 1900s, the college educated Mathewson won 373 games over 17 seasons, primarily for the New York Giants. Using his famous fadeaway pitch Matty won at least 22 games for 12 straight years beginning in 1903, winning 30 games or more four times. A participant in four World Series, Mathewson lone title came in 1905, when he tossed three shutouts in six days against the Athletics. He set the modern National League mark in 1908."

Simply put Mathewson was one of the greatest players to ever step on a baseball diamond. In 1944, an aging Roger Bresnahan who had forged a Hall of Fame career of his own, called Matty the greatest pitcher ever, saying that if there was ever a second coming of Mathewson he would walk clear across the continent to watch him pitch. That is just one instance of one of his peers appreciating his legendary work from the mound. In 1936, the Baseball Writers Association of America selected Mathewson as an inaugural member of the Hall of Fame. Unfortunately, Mathewson did not live to see that day, as tuberculosis took his life at the age of 45. With that said, legends live forever, and Mathewson is a true legend of the great game.