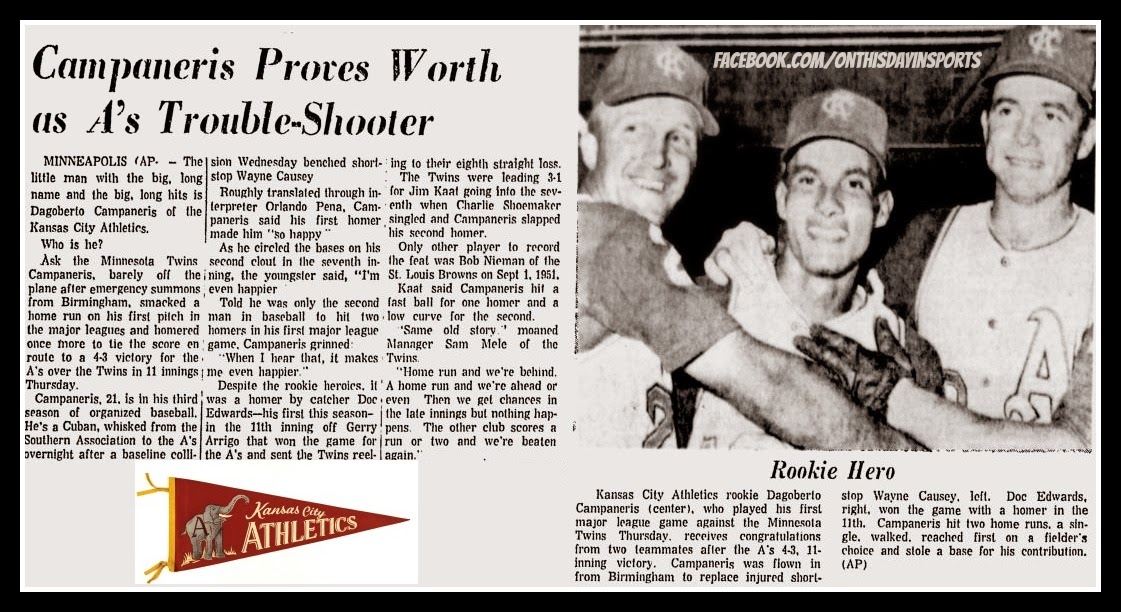 On July 23, 1964, Bert Campaneris became just the second player in the history of Major League Baseball to hit two home runs during his big league debut, as he led the way to a 4-3 victory over the Twins at Metropolitan Stadium in Minnesota. The 22-year-old had been rushed to the big league club after Wayne Causey suffered an injury, and was quite impressive as he accomplished the feat that had only been done by Bob Nieman of the St. Louis Browns in 1951. It would take 35 years before the feat was accomplished again, as Mark Quinn of the Kansas City Royals joined the exclusive club in 1999. J.P. Arencibia of the Toronto Blue Jays joined the club in 2010, and Yasmani Grandal of the San Diego Padres joined in 2012.

The21-year-old kid came from Cuba became known as "Campy." He was a part of the powerhouse Oakland  A's teams of the 1970s that won three consecutive titles beginning in 1972. He spent 19 years on a big league diamond with 13 of those seasons coming with an A's uniform on his back. He also was a member of the Rangers, Angels, and Yankees. The six time All Star carried a lifetime .259 average, with 79 home runs. Despite the extraordinary major league debut he would only have two more two home runs games during his career. With that said, his glove and his legs made him a very valuable member of those great Oakland A's teams. He led the AL six times in stolen bases between '65 and '72, and led the league in putouts three times. His 649 stolen bases currently rank 14th on the all time list, and he played in more than 2000 games before he hung them up in 1983, nearly three decades after he stepped in the box and started his own chapter in the history books.

Campy's stats: http://www.baseball-reference.com/players/c/campabe01.shtml?redir
Posted by Wade Forrester at 3:19 AM