On July 14, 1970, with 51,838 in the stands at Riverfront Stadium in Cincinnati the 41st playing of the All Star game came to a close in controversial fashion, when Pete Rose of the hometown Reds bowled over Cleveland Indians backstop Ray Fosse in the bottom of the twelfth inning to give the National League a 5-4 victory.

The turn of events that led to the play at the plate began when Angels hurler Clyde Wright surrendered back-to-back two out singles to Rose and Dodgers third baseman Billy Grabarkewitz. With Rose standing on second Jim Hickman of the Chicago Cubs lofted a single into center, and Rose was off to the races, as he rounded third Fosse was the only thing standing between him and scoring the game winner, and Rose buried his head and ran right through him.

While the play has been glorified by many who saw it as Rose giving an all out effort, the repercussions were beyond measure for the young catcher. He had clearly been injured on the play, but the injury was misdiagnosed as a bruised collarbone. He was back in the lineup the next week, and played all the way until a finger injury put him on the shelf in September. The following Spring an x ray revealed that Fosse had a separated and fractured shoulder. 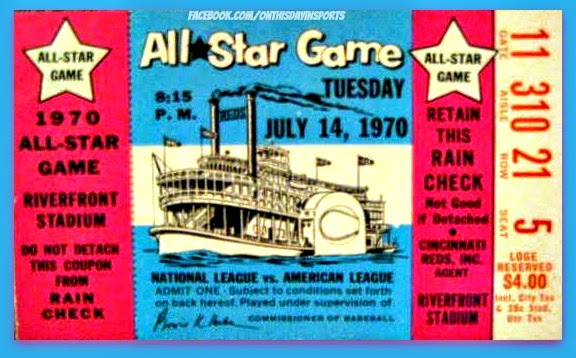 The kid who was in his first full season in the majors was just 23 years old at the time of the incident, and was batting .307 with 16 homers before the break. He still carried a respectable average after the All Star game, but his power disappeared as he hit just two more home runs the rest of the season. That one moment in time forever changed the career of Ray Fosse, and to this day he holds some resentment because of it. In the seven years that followed Fosse hit just .253 with 41 home runs. The moment he was selected to that All Star game was a moment that showed promise to a young career. The moment Pete Rose came into score is career was forever changed. Some articles credit Rose with making Fosse famous. In reality, nobody will ever know how famous Fosse might have been. I would not go as far as saying he would have been a Hall of Famer, but that play robbed him of the chance.

I would like to make it clear that I love players that play the game with an edge that gives them a competitive advantage. Rose was one of those guys. When he was on the field he gave it his all, and when he came into score that day, that is all he was trying to do. I have no doubt that Rose had no intention on injuring the catcher, but the fact is he did. It is unfortunate, but that is just how it goes. With the recent rule changes in baseball to protect the catcher it is likely that future generations will not see a career sidetracked by a play like this one. I myself have been critical about those rule changes, and think that in a lot of ways it has taken an exciting play out of the game. I guess sacrifices have to be made to protect players. That catcher position is by far the most vulnerable position on the diamond, and I commend Major League Baseball for trying to protect the young men who play the game today. I believe that the rules will be tweaked a bit and only improve with time. I know that when I tune into the All Star game this coming week the last thing I would want to see is a player have his career derailed by a play at the plate. No matter which team won the game.

Check out the box score here: http://www.baseball-reference.com/boxes/NLS/NLS197007140.shtml
Posted by Wade Forrester at 1:16 AM