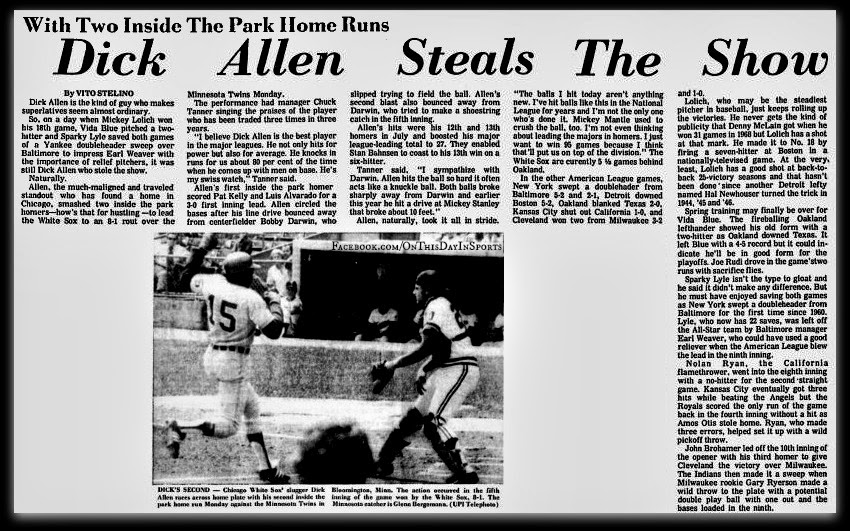 On July 31, 1972, Chicago White Sox first baseman Dick Allen became the first player since 1932 to hit two inside-the-park home runs in same game, as he led the way to an 8-1 victory over the Twins in Minnesota.

Allen's history making performance began in the first inning when future Hall of Famer Bert Blyleven walked Pat Kelly to lead things off, then gave up a single to Luis Alvarado, which set the table for Allen who rapped a line drive to center that got past Bobby Darwin and went all the way to the track, as Allen wheel around the basepaths. The three run homer set the tone for the day, and the Wampum Walloper was not done just yet, as he struck again in the fifth with a two run inside-the-parker.

The second blast was a towering drive that Darwin tried to catch at his shoestrings, only to have it get past him. As the ball got past Darwin, Allen rounded the bases once again, and he ran his way into the history books the moment he touched the dish. While Allen's five RBI performance led the way for the White Sox in the offensive department, his starting pitcher Stan Bahnsen locked down his 13th win of the year with a complete game six hit performance.

New York's Ben Chapman was the last man to achieve the feat. He had accomplished it in July of '32. 40 years later Dick joined the club. Allen was the sixteenth man to do it since 1900, and it has only been accomplished one time since, with that coming in October of 1986 Minnesota's Greg Gagne belted two inside-the-parkers in a game against Allen's former White Sox.

On a personal note, I think that Dick Allen is a player from baseball's past that is a bit overshadowed. I know that he had his bumps in the road throughout his career, but that guy was one of the greatest players of his time, and his career was a very storied one. The story about the two inside-the-park shots is just one of many great stories from the life and career of Dick Allen.