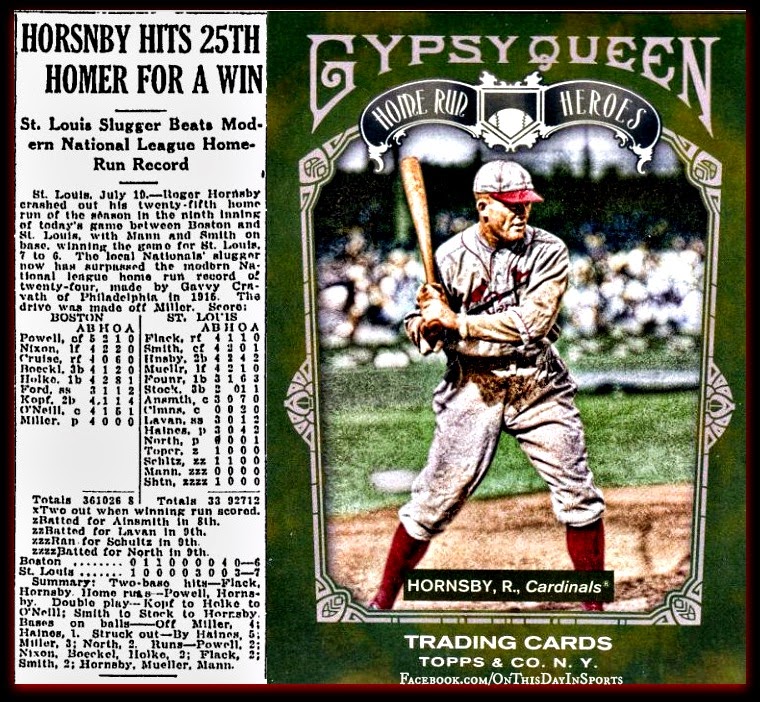 On July 19, 1922, Cardinals second baseman Rogers Hornsby broke the modern day National League home run record for a single season with his 25th big blast of the season. It was much more than an average home run, as the Cardinals came into the ninth inning trailing the Boston Braves 6-4, before Hornsby came to the dish with two men on and won the game 7-6 in walk off fashion. The record of 24 had been held by Gavvy Cravath of the Phillies, who had belted out 24 during the 1915 season.

The all time home run record for a National Leaguer dated back to 1884 when Ned Williamson of the Chicago White Stockings hit 27. Babe Ruth surpassed that single season record in 1919 when he hit 29 for the Boston Red Sox. Ruth would continue to assault the record books for many more years, as he shattered the record the following season with 54 big flies, and another 59 in 1920. Hornsby finished that '22 season with 42 bombs. The  National League mark was reestablished in 1929 when Chuck Klein hit 43. Ruth set the benchmark of 60 in 1927 which stood until 1961 when Roger Maris hit 61.

Check out the box score here: http://www.baseball-reference.com/boxes/SLN/SLN192207190.shtml
Posted by Wade Forrester at 1:20 AM