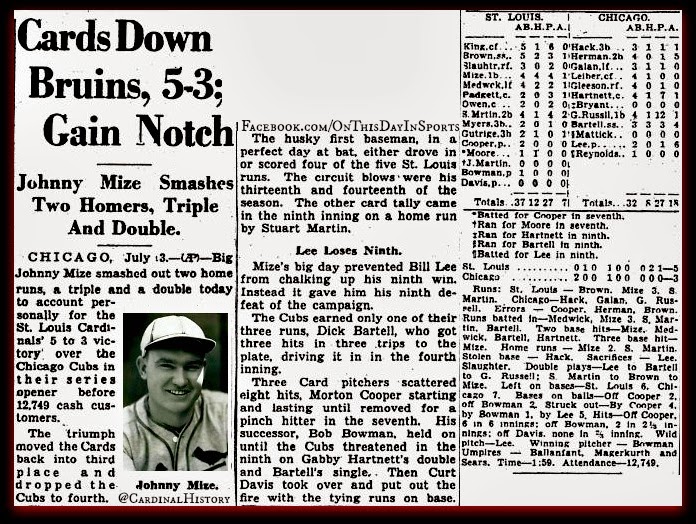 On July 3, 1939, Johnny Mize led the St. Louis Cardinals to a 5-3 victory over the Cubs in Chicago with a 4 for 4 performance, that included two home runs, a double, and a triple. The big blasts were his 13th and 14th of the season. When the '39 season came to a close, Mize had a National League leading .349 average, and he also led the league with 28 big blasts.

Mize arrived on the scene in St. Louis in 1936, just two years removed from the Championship club of '34. Nicknamed "The Big Cat", Mize manned first base for the Redbirds for six very productive seasons, as he topped the .300 mark in every campaign, before a contract dispute led to him being traded to the New York Giants in the Winter of 1941. Two years removed from the '34 Championship club, and he parted ways just one year before the championship club of 1942. However, his glory days would come.

Mize hit .305 and led the league with 110 RBIs with the Giants in '42, before losing the next three years of his career while serving his country. He returned to the lineup in 1946 with some thump in his bat, as led the National League in home runs in '47 with 51, then again in '48 with 40. His days with the Giants came to an end in August of 1949 when the team sold him to the Yankees for $40,000. At that point in his career, Mize was an aging veteran whose numbers were in decline. With that said, he ended up being a piece to a Yankee puzzle that won five consecutive championships from 1949 to 1953. During the '52 series, at 39-years-old Mize homered on three successive days. He to wait until 1981 to receive his call from Cooperstown. It came 28 years after his last

The trade could arguably be called the worst trade the Cardinals organization has ever made. In my opinion it is right there with Steve Carlton for Rick Wise. The trade that sent Mize to New York brought the Cardinals catcher Ken O'Dea, first baseman Johnny McCarthy, pitcher Bill Lohrman, and $50,000. Out of those three players, McCarthy never appeared in a game in St. Louis, Lohrman made five appearances before being sold back to New York, and O'Dea never played in more than 100 games in a season over five years with the club . With that said O'Dea was no scrub, and he did help the club win two championships ('42 and '44). O'Dea was also selected to the All Star game in '45, but never got to make that trip because the game was cancelled due to the war. He was just no Johnny Mize.

Stats of a legend: http://www.baseball-reference.com/players/m/mizejo01.shtml

Posted by Wade Forrester at 2:37 AM