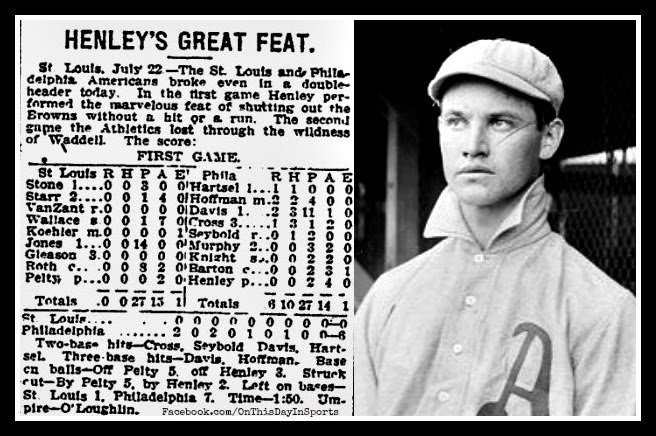 On July 22, 1905, Philadelphia A's hurler Weldon Henry tossed a no-hit gem at Sportsman's Park in St. Louis, as he led the way to a 6-0 victory in the first game of a doubleheader. The no-hitter was the first ever thrown by a member of the Athletics, and it was easily the highlight of the season for the hurler who posted a 4-11 record during the pennant winning campaign. The Browns took the second game 3-2, despite the fact that a future Hall of Famer Rube Waddell was on the bump for the A's. With Henley's great feat included the A's recorded five no-hitters when they called the City of Brotherly Love their own. The club called Kansas City home from 1954 to 1967, and during that time not one no-no was recorded by them. The team has since recorded five more no-hitters as a resident of Oakland, California, with one of those five being a combined no-hitter. The last no-no to be recorded by a member of the A's came in 2011, when Dallas Braden matched Henry's great feat against the Tampa Bay Rays.

Henley had a short four year career in the big leagues. He posted a 32-43 record during that time with his only winning record coming during his rookie season in 1903 when he went 12-10. The most wins he ever recorded in a season came in 1904 when he won 15 games, but lost 17. After the 4-11 campaign in 1905, he returned in 1906 and went 1-5 before his playing days as a Major League came to an end in late June of that year. The information about Henley is scarce, but from what I could find he continued to play ball at the minor league level until 1909. He lived a long life, he passed away at the age of 80 in 1960. While his days in Major League Baseball that might not have been as storied as some of his peers, he always had the tale to tell from his 24th year on earth when he traveled to St. Louis had pitched the game of a lifetime.

Posted by Wade Forrester at 2:20 AM