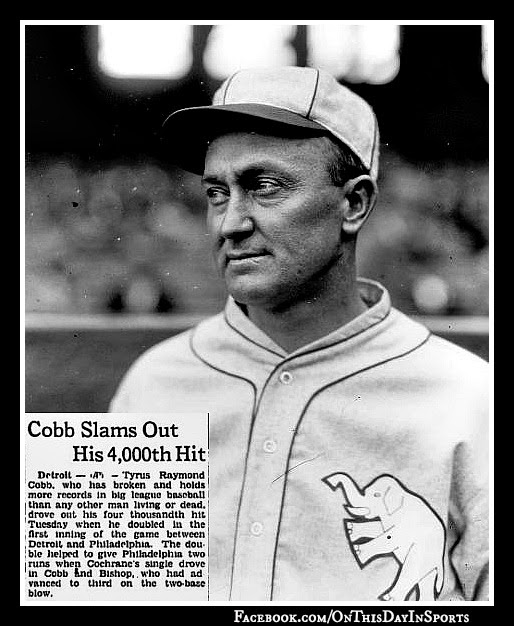 On July 18, 1927, with a first inning double in a game against his former club, Ty Cobb picked up the 4,000th hit of his career, as he helped lead the Philadelphia A's to a 5-3 victory over the Tigers in Detroit.

The historic knock off of hurler Sam Gibson came with little fanfare. It was quite the surprise to me as I looked through multiple newspapers, and the Sporting News as well without finding the glorious headline sprawled across a page. The only stories were the little blurbs like the one featured in the picture. The big news of the day was about Yankees' sluggers Babe Ruth and Lou Gehrig who were going back and forth in a home run race amongst teammates. Gehrig had taken the lead by putting his 31st over the wall. Historically of course the true story of that day was the about the man who had become known as the "Georgia Peach" as he had done something that had never been done before.

3,900 of those hits came while wearing the uniform of the Tigers over a 22 year period. He had been forced into retirement due to a gambling allegation. The commissioner of baseball Kennesaw Mountain Landis cleared him, and Cobb decided that he was not going to leave the game with a black cloud over his head, which led the star to Philly. He inked a $70,000 deal with a huge bonus that made him the highest paid player of his day, and he earned those pennies by hitting .357 in '27, and .323 in '28. Cobb was 40 years of age during that first season, and those A's clubs he was a part of were great teams who finished second behind the Yankees who had the legendary "Murderers Row" in their lineup in New York.

Cobb finished his career with a record 4,191 hits. In 1984, 57 years after Cobb had rapped that double, Pete Rose joined him in the 4,000 hit club, and in September of '85 Rose picked up hit number 4,192 and became baseball's all time hit king. Rose finished his career with 4,256 hits and still owns that title. Rose is also the only other man who his not named Cobb to pick up 4,000 hits. Who will be the next man to join that club? Time will tell. It may just remain a party of two.

It should be noted that official records were changed later that brought Cobb's hit total to 4,189. With that said the magic number for Rose was 4,191 as it had been the number that had been a part to of baseball lore.

Posted by Wade Forrester at 3:04 AM