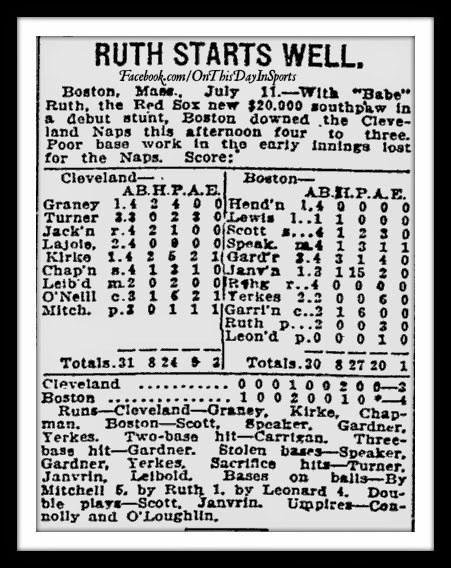 On July 11, 1914, a 19-year-old kid by the name of Babe Ruth made his major league debut for the Red Sox at Fenway Park in Boston. The kid had a solid seven inning outing, scattering eight hits, while allowing three runs to cross the dish, as he helped lift the Sox to a 4-3 victory. Ruth was assisted with a variety of miscues on the Cleveland side that helped him and his teammates celebrate a win on the day his major league career began. When fans of the game flipped through their newspapers the following day, they most likely browsed right past this story about the "$20,000 southpaw", little did they know how many more pages would be written about that young man who everybody called Babe.

This biography provided the Society of American Baseball Research, is in depth, and will give you a great look at the life and times of George Herman Ruth: http://sabr.org/bioproj/person/9dcdd01c
Posted by Wade Forrester at 2:32 AM