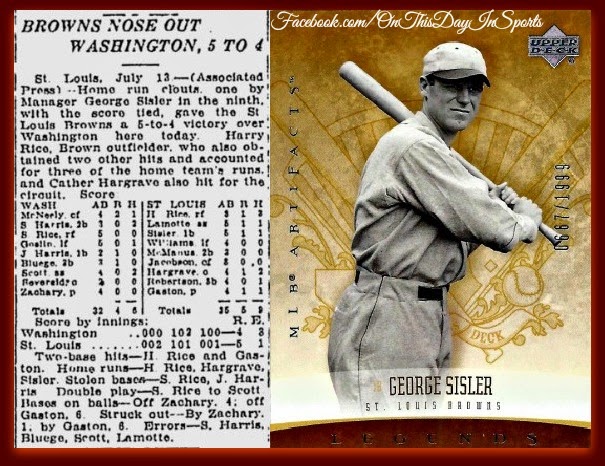 On July 13, 1925, Gorgeous George Sisler led the Browns to victory with a walk off shot at Sportsman's Park in St. Louis that gave his club a dramatic 5-4 victory over the visiting Washington Senators. The mercury was touching the 100 degree mark that day in the Mound City and the Browns bats were nearly as hot as the weather, as they connected with three home runs on nine hits. Harry Rice was the hottest hitter, going 3 for 3 with a homer, and a double, while catcher Pinky Hargraves put one in the seats as well. Sisler's big fly removed an 0 for 4 collar, as he belted the walk off bomb with one out in the ninth.

One of the best hitters of his era, Sisler hit 102 home runs during his Hall of Fame career. Four of those 102 were walk off shots, with the one on that hot July day in St. Louis being the second of the four. Twenty of them were inside the park shots. While Sisler could put a charge into one, he was best known for being the one of the best all around players of his era.

The National Baseball Hall of Fame and Museum's website has a great bio about Sisler that goes as follows: "A sharp batting eye and extraordinary fielding ability at first base led Ty Cobb to call Sisler the nearest thing to a perfect ballplayer. The owner of an engineering degree, Sisler was one of baseball's most intelligent and graceful ballplayers, starring predominantly for the St. Louis Browns. He won two batting titles, hitting over .400 twice, and amassed an astounding total of 257 hits in 1920, a record that stood for 84 years until surpassed by Ichiro Suzuki in 2004. He had a 41-game hitting streak in 1922, hit .300 or better 13 times, and had a sizzling .340 lifetime average." On a sidenote, when Ichiro was in St. Louis during the 2009 All Star game he paid a visit to Sisler's grave. It was an absolutely classy move by one of the great players of our time.


As a native St. Louisan I love to look back at those days that Sisler called Sportsman's Park home as a member of the Browns. It had to be something to have Rogers Hornsby playing in the same town for the National League's Cardinals. Sisler hit .420 in 1922, while Hornsby cranked out a .401 average that same season for the Cardinals. No matter which team was in town the fans could go to the ballpark, and watch one of the greats of the era. They both began their playing careers in St. Louis in 1915. Hornsby spent the first 11 years of his career with the Birds, while Sisler spent the first 12 years of his career with the Browns. That stretch of baseball was not just a Golden Era in the city that became known as The Gateway to the West, it was truly a Golden Era in all of baseball.