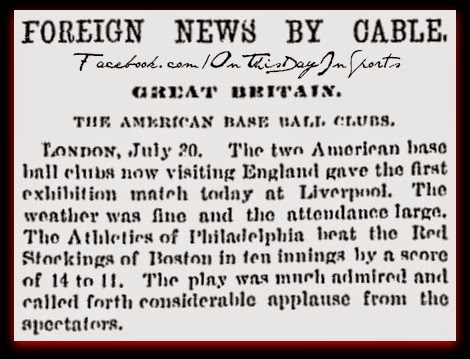 On July 30, 1874, the Boston Red Stockings and Philadelphia Athletics played the first professional baseball game on foreign soil at the Edge Hill Cricket Grounds in Liverpool, England. The Athletics beat the Red Stockings by the score of 14-11 in the contest that was the just the beginning of a three week tour. Some 400 people showed up to watch the game that is played on a diamond, and they cheered the teams throughout the contest.

The idea to travel abroad was the brainchild of the Red Stockings manager Harry Wright who sent his star pitcher A.G. Spalding to England to arrange a tour of the British Isles. The two clubs that were involved were the cream of the crop on American soil, as the Athletics were the 1871 champions, while the Red Stockings were two-time defending champs, and they were headed toward another title as well. The two clubs took an unprecedented break from the National Association's schedule to take baseball to places it had never been seen before.

In a diary written by Boston's Andy Leonard it was said that the fans said things like "ah, it's the old game of rounders", while others proclaimed they believed that Americans could beat their beloved cricket squads at their own game, and they were right. It was also said that the fans would cheer for long foul balls because they did not have an understanding of the game.

The two clubs played in Manchester, London, Richmond, Sheffield, and Dublin over the next few weeks, and they not only played the game of baseball, they also fielded cricket teams against the locals, and did not lose a match. After the three week stretch was over the teams boarded a ship and headed back to American soil where they would each finish out the season. The Red Stockings won 22 of their last 37, as they stormed toward their third consecutive title. It was said the game of baseball was not well received which made the trip an unprofitable one. With that said those two teams still had done something that had never been done before. It was a truly historic trip as the game that would become America's National Pastime was shared abroad. It also led to another world tour in 1888 and 1889, as well as the famed tour of 1914 that was featured on this blog earlier this year.

To date, I believe this to be the oldest fact that I have ever used. Simply finding the article that appeared in a newspaper from the following day was a true thrill for me. It is something to think of those men who were true pioneers of the game. They were taking a game that they had learned to love, and shared it with others. Today I tip my cap to them. 140 years later, I too love that game.

I am going to include several references today. A great deal of information about the trip came from the book: The Irish In Baseball: An Early History by Dave Fleitz. It looked like a very interesting book, that detailed much more than this trip.  This website also provided insight into the trip as well as the game of baseball before the century turned the corner: http://www.19cbaseball.com/  If you happen to be interested in the 1914 tour you can read about it here: http://onthisdayinsports.blogspot.com/2014/02/february-1-1914-white-sox-and-giants.html
Posted by Wade Forrester at 1:31 AM