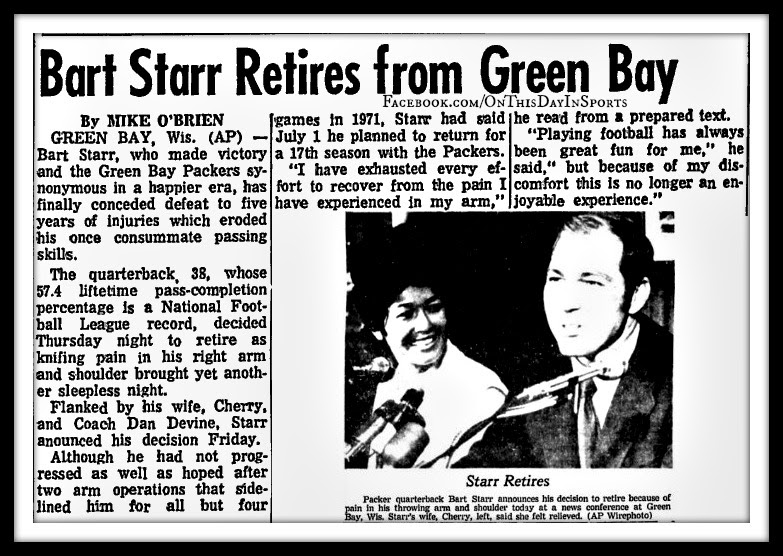 On July 21, 1972, an era in football came to a close, as Bart Starr the legendary quarterback of the Green Bay Packers announced his retirement. The quarterback who played his college ball at Alabama had forged a Hall of Fame career with the Packers that began in 1956. The road to the Hall of Fame did not come without growing pains, and his record of 11-20-1 over his first five years is a true testament to the fact. A true turning point in Starr's career and the history of the Packers as well came when Vince Lombardi joined the organization. Before Lombardi arrived in 1959, the team shuffled quarterbacks. After he arrived the coach handed the reigns to Starr and as they say the rest is history.

While wearing a Packers uniform Starr represented the team in the Pro Bowl four times, and guided the team to five championship seasons which included a victories in Super Bowl I and II, taking MVP honors in both.  From 1961 to 1967 the Starr led Packers did not suffer a losing season. However, a hit laid on him during the '66 season would be one that had a long lasting effect on his shoulder. After the '67 season the Packers began to slide, as Starr tried to fight through the injury, but it was something that he could not overcome.

After playing in just four games during the '71 campaign Starr realized it was time, and the press conference was called to make the announcement that he would not be returning to the field as a player. Starr did join the coaching ranks as a quarterbacks coach, before taking over as head coach with limited success. His finest hour from the world of sports was after his playing career came to a close came in 1977 when he was elected to the Pro Football Hall of Fame, which insured generations to come would know the name Bart Starr.

Stats of a legend: http://www.pro-football-reference.com/players/S/StarBa00.htm
Posted by Wade Forrester at 12:34 AM