April 1, 1919: The Spanish Flu Causes the Stanley Cup Finals to be Cancelled 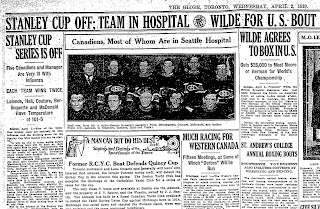 On April 1, 1919, the Stanley Cup Finals were cancelled due to an outbreak of the Spanish flu. The Montreal Canadiens were set to take on the Seattle Metropolitans in game 6 when the flu struck the Canadiens team with a vengeance. Several players had to be hospitalized along with the manager of the Canadiens squad George Kennedy. When Kennedy realized he would not be able to put a full team on the ice he had no choice but to forfeit the Stanley Cup to Seattle. The head coach of the Mets, Pete Muldoon refused to accept the championship under these conditions and no Stanley Cup was awarded that season. It was the one and only time the playoffs were held and a champion was not crowned.

The 1919 series was set to be a best of 5. It was an odd setup with the teams alternating between the PCHA rules and the NHL rules throughout the series. Seattle dominated under the PCHA rules which were set to be used in games one, three, and five. In the first game the Mets beat the Canadiens 7-0. When it shifted back the NHL rules the Candiens were able to even things up with a 4-2 victory. With the rules shifting back to Seattle's advantage they put up another lopsided victory in game 3. In game 4 the teams skated to a 0-0 tie which led the Canadiens to lobby for game 5 to be played under the NHL guidelines. Seattle protested a bit but it was decided they would play under the NHL rules and that any future playoff game would be played until someone scored. Game 5 was the hardest fought battle of the series as Montreal found themselves down 3-0 before storming back and sending it to overtime. Nearly 16 minutes into the extra frame Jack McDonald scored the game winner for the Canadiens and the deciding game was set to take place in Seattle before the flu hit the Canadiens squad like a freight train. 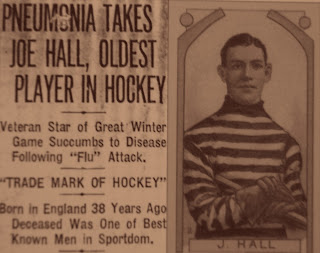 The impact it had on the team was beyond imaginable as Joe Hall, Newsy Lalonde, Billy Coutou, Jack McDonald, Louis Berlinguette, and manager George Kennedy had to be hospitalized or were sent home to bed. While most of them recovered, Joe Hall wasn't so fortunate, just 5 days after the series was cancelled, Hall passed away from pneumonia that had been brought on by this violent strain of the flu. Hall was 37 years old, while he only played in the NHL for two seasons he had played the game for 17 years at the professional level. Most of his teammates were able to come to his funeral. The manager George Kennedy never fully recovered either, a few years after the flu hit his team he passed away at the age of 39.

The Spanish flu killed anywhere from 50 to 100 million people worldwide. It began in January of 1918 and lasted nearly three years, affecting over 500 million worldwide. The worldwide impact really makes what happened with the Stanley Cup a secondary story in a lot of ways. A worldwide flu pandemic is a scary thing to think about and when it comes to the forces of nature no one is immune, not an athlete or even a king. People could only speculate on where the flu originated, when the King of Spain nearly died from being stricken with the deadly strain it led to the nickname Spanish Flu. 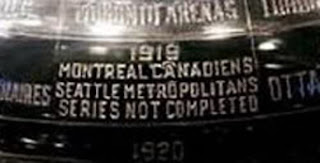 The choice by Seattle's management to not claim the championship when Montreal was struck by this horrible illness was the right choice since neither team had truly won the series. There was nothing engraved on the Cup to commemorate either team until 1948 when it was redesigned and both teams were added to the collar.