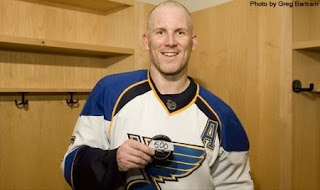 On April 6, 2008, on the final day of the regular season, Keith Tkachuk of the St. Louis Blues scored the 500th goal of his career. He reached the milestone with a shorthanded empty netter in a 4-1 win over the Columbus Blue Jackets. Tkachuk was the 41st player to reach the mark, and he is one of five American born players that have scored 500 goals. Big Walt would light the lamp 38 more times before he retired in 2010. Tkachuk laughed about his milestone goal because he never thought it would come on a penalty kill with an empty net nonetheless.

Tkachuk's first goal came on March 18, 1992 when he was just a 19 year old kid playing for the Winnipeg Jets. Tkachuck developed into a team leader and regular goal scorer, he was named the captain of the Jets in 1993. His best year in Winnipeg came the in the '95-'96 season it was the last year the team was in the city. He scored 50 goals and had a career high 98 points, before the franchise relocated to Phoenix. In Tkachuk's first season in Phoenix he led the league with 52 goals and had truly developed into one of the best in the game. He continued to light the lamp for the Coyotes for several years before he was traded to the Blues in March of 2001. 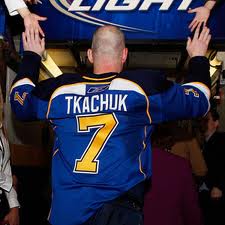 Tkachuk made an immediate impact in St. Louis, with the team making a playoff push he scored 6 goals in the last 12 games of the season. The team advanced through the first two rounds of the playoffs before being knocked off in the Western Conference Finals by the Colorado Avalanche, Colorado went onto win The Cup. Tkachuk became a fan favorite in St. Louis over the next few years, in his first full season in the Lou he lit the lamp 38 times. He topped the 30 goal mark three years in a row to start his run with the Blues. After the lockout cancelled the '04-'05 season he came back and had a sub par year but bounced back by scoring 20 goals for the Blues in  the '06-'07 campaign before being moved to the Atlanta Thrashers near the trade deadline. He scored 7 goals for the Thrashers but they weren't able to make any noise in the playoffs. He wasn't out of a Blues uniform very long, the Blues reacquired Tkachuk before the next season began and he was set to finish his career in St. Louis. At that point Tkachuck was 35 years old and his time in the league was coming to an end. Tkachuck scored 27 goals in his return to the Blues, with his 27th being his 500th of his career. After one more solid season his numbers fell off and he called it a career in 2010. While Tkachuk wasn't able to win Lord Stanley's Cup he was a remarkable player that will surely find his way into the Hall of Fame, he will be eligible in 2015.