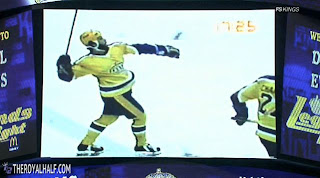 On April 10, 1982, in a game that would become known as "The Miracle on Manchester" the L.A. Kings stunned Wayne Gretzky and the Edmonton Oilers in the third period by scoring 5 goals after being down 5-0. The game would go to overtime before Daryl Evans completed the biggest comeback in the history of the NHL playoffs by scoring the game winner.  The fans inside The Forum erupted as they had just witnessed the improbable. Combined with upset wins in Games 1 and 5,
the Kings eliminated the heavily favored Oilers in a 3-2 series victory to send them to the second round.
http://www.youtube.com/watch?feature=player_embedded&v=bUrWcOq11V8