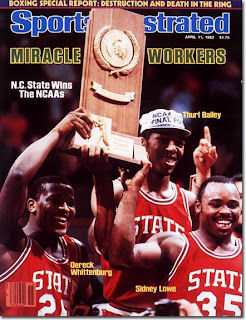 On April 4, 1983, North Carolina State completed one of the most improbable runs in NCAA history as they beat Houston 54-52 in the National Title game. The Wolfpack cemented their place in history with a dunk by Lorenzo Charles at the buzzer in the title game. The team was led by coach Jim Valvano and he truly made them believe they could achieve anything and achieve they did. With a 17-10 regular season record nobody but Valvano and the guys in that locker room believed they were capable of what could arguably be the greatest run in the history of NCAA Basketball. When Charles slammed the ball through the hoop the The Pit in Albuquerque, New Mexico erupted and Valvano ran on the floor looking for anybody to hug as his team had just won the National Championship. It was truly one of the greatest moments in the history of the tournament as Cinderella put on the glass slipper and it fit great.

It had been a season of  ups and downs for the Wolfpack, with injuries taking away a key player in Dereck Whittenburg for an extended period the team had to rally around each other as they tried to keep winning ballgames. The young men in that locker room included Thurl Bailey, Cozell McQueen, Sidney Lowe, and Lorenzo Charles. All of these kids were capable of doing great things. When Whittenburg was hurt it was a definite blow to the team as they lost three of the next four before things started turning around. The players had a closed door meeting and whatever was said sparked them into winning 8 of their next 10 before stumbling again at the finish line. Whittenburg returned to the lineup with just three games to go in the season. Even with his return the Wolfpack lost 2 games in a row before finishing the season with a huge win over Wake Forest. The team finished with a 17-10 record and coach Valvano let them know the only way they would get into the big dance was by winning the ACC tournament which would be no easy task.

The first team they faced in the ACC tourney was Wake Forest, the Wolfpack beat the Demon Deacons handily in the regular season finale by the score of 130-89, it wouldn't be the case in the first round of the ACC tournament. Wake Forest battled N.C. State down to the wire as the Wolf pack barely escaped with a 71-70 victory. The next game had the Wolfpack facing Michael Jordan's Tar Heels, this game would go into overtime before N.C. State would claim a 91-84 victory. The final game of the tournament had them matched up against Ralph Sampson and Virginia. Sampson was one of the best players in college basketball and the Cavaliers had already beaten the Wolfpack twice, the team knew it was win or go home and they came out and played like champions as they stunned Virginia by the score of 81-78. This was just the beginning of this historic run. 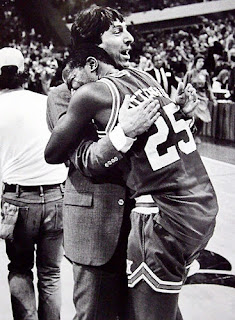 With the ACC title secured N.C. State was in the Big Dance. Valvano told his team from day one that he knew he was going to win a championship, it was his dream and it was a bold statement at the time but he instilled the belief in them they could get it done and this team would make their coach's dream a reality. The first couple of seasons that Valvano coached N.C. State the team didn't live up to expectations, they didn't make the tournament in his first season as head coach then made an appearance the following season but made a first round exit. It was his third year with the Wolfpack when they made history.

The first game N.C. State faced was the squad from Pepperdine University, the Wolfpack lacked focus early and had to dig themselves out of a hole just to force overtime. Pepperdine had a 6 point lead with a less than a minute on the clock. With it looking like N.C State would be making another first round exit the improbable happened, Dane Suttle from Pepperdine missed some key  free throws and the Wolfpack came storming back to force another overtime. Both teams fought hard for the victory but it was N.C. State who came out on top by the score of 69-67. The team had a flare for the dramatic as they kept fans on the edge of their seat and there was more to come.

The next obstacle in front of them was UNLV. Once again N.C. State found themselves shooting from behind the eight ball as they fell behind 52-40 with just a little more than 11 minutes to go in the game, then the tide turned. The team went on a run and with just 37 seconds to go Thurl Bailey nailed a jumper that cut the lead to 70-69. After UNLV wasn't able to convert from the line Bailey hit a fade away jump shot  that gave N.C. State 71-70 victory. It was heart stopper after another as the Wolfpack kept finding a way to win.

The only game they played throughout this run that might be considered easy was the win in the next round as they beat Utah 75-56. With that victory behind them they were set to meet Virginia once again and they knew it would be far from easy to take down Sampson and the Cavaliers, especially after they wanted revenge for losing the ACC Title. It was another classic battle between the two squads that went right down to the wire. In the final seconds of the game Virginia was clinging to a one point lead when Sampson fouled Lorenzo Charles, Charles went to the line and sank both his free throws and the Pack was headed to the Final Four with a 63-62 win over Virginia. What they were doing was beyond anyone's wildest dreams besides their head coach Jim Valvano this was something he had dreamed all along.

Even with N.C. State reaching the Final Four some people thought the run had to be coming to an end. The first thing they had to do was beat the Georgia Bulldogs. They handled the team out of Georgia well as they built an 18 point lead with less than five minutes left in the game. The Bulldogs didn't go down with out a fight as they pulled within 7 but it wouldn't be enough as the Wolfpack held onto a 67-60 victory. The team was headed to the title game and they were set to face the Houston Cougars that featured Hakeem Olajuwon and Clyde Drexler. 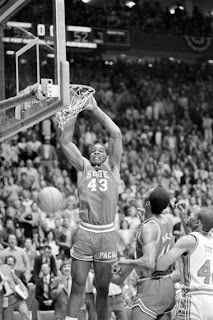 The newspapers almost wrote an obituary for the Wolfpack squad before the title game was even played, there was simply no way that this team could take down the team out of Houston, or so they thought. The team was prepared to take on Houston with a plan to try and control the tempo of the game, it looked like the plan was working well as they had a 33-25 lead at the half. The Cougars came out on fire after halftime as they went on a 17-2 run. Suddenly the lead was gone and Houston was on top 42-35, N.C. State needed something big to happen to keep the dream alive. They got what they needed when several missed free throws and turnovers helped them to even the score at 52 with just 1:59 on the clock. Both teams tried to stall to take it down to the wire, then in the final seconds N.C. State tried desperately to penetrate the zone or just find any one that could nail a clean shot. The ball wound up in the hands of Sidney Lowe before he threw the it wildly to Dereck Whittenburg who put it in the air in hopes of winning the National Title. Everybody that seen the shot knew it didn't have enough distance then Lorenzo Charles plucked it out of the air and slammed it through the hoop. North Carolina State had just won it all, they were National Champions.

It truly might be the greatest story in the history of college basketball. Everything about it sounds like it is made for a movie. I recently watched ESPN's 30 for 30 Survive and Advance that covered this improbable run if you get a chance be sure and watch it, they truly did a great job. Sadly it came after Lorenzo Charles lost his life in a bus accident in 2011. The hero of the title game might have perished but that game winning moment will live forever in the history of sports.

It's stories like this one that makes me love sports. Sometimes it just seems the stars are aligned and there is nothing in the world that can stop a team from winning it all. The job that Jim Valvano did with that team is something that should not only be admired it should be celebrated each and every time the anniversary of this game comes up. He was the perfect guy for that job and he achieved a lifelong dream on that day in Albuquerque, New Mexico. 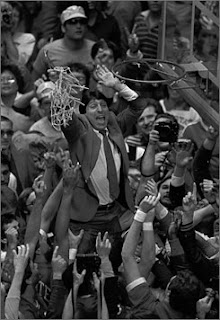 Most of us know the story of Jim Valvano and how he lost his life to cancer at the age of  47.  I'm sure most of us have heard his speech at the ESPY awards before he lost that battle. In that speech he asked for people to give to the Jimmy V. foundation to help fight a battle he was sure to lose it was an effort to help those in the future that might come across the same battle.  What the Jimmy V. foundation does to help cancer research is very important and it will hopefully help people beat the battle that Valvano lost in April of 1993.

I will leave you today with a link to his ESPY speech and a link to his foundation. It really is a good cause and 100% of the money donated goes to cancer research. Valvano may not of won his battle but his fight still continues. http://www.jimmyv.org/

If there was ever a guy that could carry a room it was Jim Valvano. Here is his Espy Speech:
http://www.youtube.com/watch?v=HuoVM9nm42E