April 3, 1945: Liscombe scores 4 goals as the Red Wings advance to The Finals 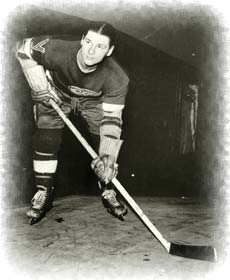 On April 3, 1945, with a trip to the Stanley Cup Finals on the line, Detroit Red Wings left winger Carl Liscombe scored 4 goals as his team beat the Boston Bruins 5-3 in Game 7 of the semi final round of the playoffs. It was a remarkable performance by Liscombe as he almost single handily punched his team's ticket to the Finals. Unfortunately he wouldn't be able to match his performance in the Finals as the Red Wings fell to the Toronto Maple Leafs in 7 games. His four goals stands as a Red Wings record for most goals by any player in a playoff game.

Liscombe got his start in the NHL during the '37-'38 season, he was described as a smart player who was fast and could handle a stick well. He quickly became an offensive presence in Detroit,  in a game during his rookie campaign he scored a hat trick in just 1 minute and 52 seconds it was a record that stood until Bill Mosienko scored a hat trick in an unbelievable 21 seconds in 1952. 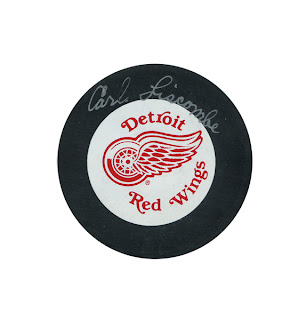 Liscombe developed into a solid player at a rapid rate and by 1943 he was able to hoist the Stanley Cup as Detroit swept Boston in the Finals. Liscombe led his team with 6 goals during that run and he had established himself as a true scorer. The following season would be his best statically as he scored 36 goals and tallied a total of 73 points. The 36 goals was just two shy of the league leader. His next real shot at a Championship came in the '44-'45 season when he had the four goal game that moved his team onto the Stanley Cup Finals. Liscombe and the Red Wings gave everything they could to take home another title but it just wasn't to be and Toronto took the crown. Liscombe played one more season in Detroit following that run at a title, he was then sold to an AHL club where he spent the rest of his playing days. In his 9 years in Detroit, Liscombe scored 137 goals along with 140 assists. He might not have put up Hall of Fame numbers but he was a key player for close to a decade and once upon a time he helped send the Red Wings to The Finals
Posted by Wade Forrester at 1:59 PM