On March 31, 1923, in the deciding game of the Stanley Cup Finals, Ottawa Senators defenseman King Clancy became the first player to play all six positions in a game, including goaltender. The Senators squad was battered and bruised which led Clancy to doing it all. His team went onto win the game by the score of 1-0 and the Senators took home the Stanley Cup. 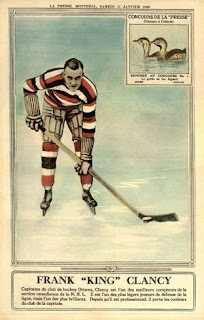 The 1923 Stanley Cup Champions would be decided with a three game series. The Senators beat the Montreal Canadiens on their way to meeting the Edmonton Eskimos in the Stanley Cup Finals. In the first game of the series Edmonton grabbed a 1-0 lead early, before the Senators tied it up in the third with a goal by Lionel Hitchman. The game was headed to overtime. Two minutes into the extra frame, Cy Denneny scored the game winner and the Senators needed just one victory to be named champs.

The second game had Clancy's team reeling with injuries. At least 4 players weren't able to play the entire game and some of those that did play were far from 100%. The Senators took an early 1-0 lead with a goal from Punch Broadbent. They were able to hold onto it with Clancy doing literally everything to keep his team in the game. At the time goalies had to serve their own penalties if they were called for an infraction, when Clint Benedict took a two penalty Clancy jumped between the pipes and stopped everything the Eskimos threw at him. It was an amazing effort by Clancy that led his team to celebrating a championship victory.

It was just the beginning for Clancy, he spent 16 seasons on the ice between the Senators and the Maple Leafs. He won another Stanley Cup as a member of the Senators in 1927 then his third and final championship came with the Maple Leafs in 1932. His playing days ended in 1937 but his contributions to the sport were far from over. He coached the Montreal Maroons and officiated games before until 1953 when the Toronto Maple Leafs came calling. He was head coach of the Maple Leafs for three seasons, before moving to the front office. Clancy remained with in Toronto until he passed away in 1986. The man that could play every position in a game and dedicated his entire life to hockey was inducted into the Hockey Hall of Fame in 1958.