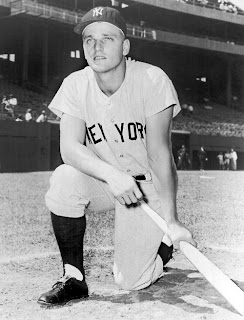 On April 26, 1961, Yankees outfielder Roger Maris hit his first home run of the season off of Tiger hurler Paul Foytack. The blast was the beginning of the historic quest to break Babe Ruth's single season record of 60 home runs that had been set in 1927. Maris would need every single game to break Ruth's record, he hit 61 in the fourth inning in the last game of the season to become the single season record holder. Despite his record breaking performance the commissioner of baseball Ford Frick chose to put an asterisk next to his 61 homers because Maris didn't break the record in the same amount of games. It was a low blow that took away from the achievement and Maris remained bitter about it the rest of his life. In an interview in 1980, Maris said "They acted as though I was doing something wrong, poisoning the record books or something. Do you know what I have to show for 61 home runs? Nothing. Exactly nothing." Maris passed away just 5 years after he made that statement. I wish he knew how much people came to appreciate the achievement. It truly was one of the greatest seasons by one man in the history of the sport.

Posted by Wade Forrester at 7:47 AM