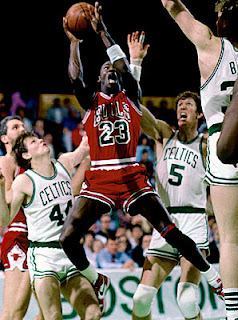 On April 20, 1986, in Game 2 of the first round of the playoffs, Chicago Bulls star Michael Jordan scored a playoff record 63 points against the Boston Celtics. Despite his heroics the Bulls would lose the game by the score of 135-131 to Larry Bird's squad in a double overtime thriller. The Celtics swept the Bulls out of the playoffs in three games, then went on a run for a title. The 23 year old Jordan said before the game "I don't think one man can beat the Boston Celtics", in the end he was right but it wasn't for a lack of effort. Jordan's 63 broke former Lakers great Elgin Baylor's record of 61 points that had been set in the NBA Finals in 1962. The legend of Michael Jordan was just beginning, he broke into the league in 1984 but had limited success in the playoffs until 1991 when he won his first title, it would be the first of six championships for Jordan and the Bulls.

Here is a great video that tells the story of Jordan's historic performance
http://www.youtube.com/watch?v=iM63pKvNu50

Posted by Wade Forrester at 7:46 AM