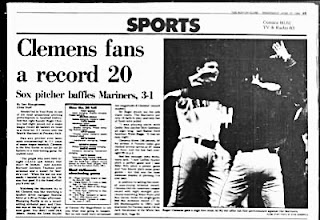 On April 29, 1986, in a 3-1 win over the Seattle Mariners, Red Sox hurler Roger Clemens broke a major league record by striking out 20 batters in a nine inning game. The Rocket would match the feat in September of 1996, then in 1998 Kerry Wood joined him as the only two pitchers to strike 20 men out in a nine inning game. Randy Johnson struck out 20 men in nine innings in 2001, but since the game went into extra frames it's not categorized as occurring in a nine inning contest. The record for strikeouts in a game belongs to Tom Cheney he fanned 21 batters in September of 1962 as his Washington Senators beat the Baltimore Orioles 2-1 in 16 innings.

Here is an impressive list of pitchers who have struck out 18 batters or more in a nine inning game:
http://en.wikipedia.org/wiki/List_of_Major_League_Baseball_pitchers_with_18_strikeouts_in_one_game
Posted by Wade Forrester at 7:50 AM