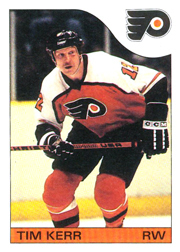 On April 13, 1985, Philadelphia Flyers right winger Tim Kerr set a playoff record when he lit the lamp 4 times in the second period of Game 3 of the Patrick Division Semi-Finals. All 4 goals came in just an 8 minutes and 16 seconds span. The Flyers went onto win the game by the score of 6-5 which swept New York right out of the playoffs. The Flyers momentum carried them all the way to the Stanley Cup Finals where they were knocked out by the Edmonton Oilers. Mario Lemieux was able to match Kerr's playoff record of 4 goals in one period in April of 1989, but no player since Lemieux has been able to repeat the feat.

Here is a short video about his remarkabe performance
http://www.youtube.com/watch?v=YS9QcMe54jw
Posted by Wade Forrester at 11:02 AM